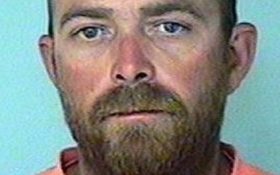 A man suspected of killing an Arizona police officer was fatally shot by officers who had surrounded a cabin where he was holed up, authorities said.

KNXV-TV in Phoenix reports authorities say 36-year-old Daniel Erickson shot at police after more than 6 hours of negotiations late Tuesday, and officers returned fire on the man who was barricaded inside a cabin near the city of Show Low.

There was no immediate word on a motive.

Officer Darrin Reed was taken to a hospital in critical condition after the 1:30 p.m. shooting and later died from his injuries, police said.

Police said Erickson, of Huachuca City, was a convicted felon who has served two prison sentences in Arizona – a four-year term for a drug conviction in 2009 and five months for an endangerment conviction in 2007.

Police said Erickson was seen leaving a Show Low hotel near the scene of the shooting in a vehicle and was dressed in a black leather trench coat and reportedly armed with a silver handgun.

The car Erickson drove from the scene was found abandoned Tuesday evening and he was believed to be driving another vehicle with an Arizona license plate, according to authorities.