Justice! Liberal professor that attacked journalist OUT - The Horn News 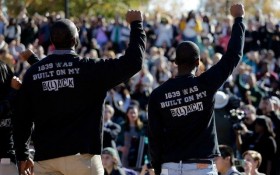 University of Missouri Professor Melissa Click resigned her courtesy title with the School of Journalism Tuesday night after video surfaced of her asking for “more muscle” to remove an MU student journalist from a protest.

In an apology letter, Click claimed the  day was, “full of emotion and confusion” which influenced her  actions.

Missouri students have launched campus-wide protests over ongoing racial issues at the school, which led to the resignation of the school’s president and chancellor.

In the video, which was circulated widely through news outlets and social media, Click can be seen intimidating a student reporter and demanding that he stop covering a protest.

That set off alarms not only among First Amendment and press advocates, but also at Missouri’s journalism school, considered one of the best in the world. The school’s dean announced Click’s appointment was under review shortly after the video surfaced.

The scrutiny the video received has led to threats against Click and campus-wide. The University of Missouri has increased security and is investigating online threats.