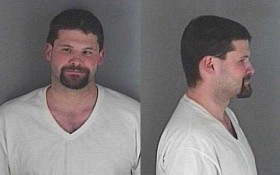 A 29-year-old Topeka man plans to plead guilty to a criminal charge that he helped another man who plotted last year to bomb the Fort Riley military base to aid the Islamic State group.

Alexander E. Blair’s attorney filed a request Thursday to change the not guilty plea entered for him last year by a federal magistrate. A change-of-plea hearing is scheduled for May 23 before a federal judge in Topeka.

“Mr. Blair believes that the government possesses sufficient evidence to convict him of the crime of conspiracy,” the request said.

Blair is accused of helping 21-year-old John T. Booker Jr. as Booker planned to plant a bomb outside the Army installation, about 60 miles west of Topeka. Booker was arrested outside the post as he was trying to arm what he thought was a 1,000-pound explosive device.

The charge against Blair carries a sentence of up to three years in prison.

Blair’s attorney, Christopher Joseph, declined to comment about the request, as did Jim Cross, a spokesman for the U.S. attorney for Kansas.

Blair’s change-of-plea request said he met Booker at a Topeka mosque and learned of Booker’s plot between January and April 2015. The court document said Blair was receptive to being Booker’s friend because Blair has a genetic disorder, Williams Syndrome, that can make social interactions more difficult and lead to isolation in adulthood.

The document said Blair loaned Booker $100 so Booker could rent a storage unit for bomb materials and advised Booker to “cease talking openly about his intentions” to avoid being reported to law enforcement.

The document includes an excerpt from an interview with FBI agents in April 2015 in which Blair acknowledged knowing the loan’s purpose.

According to the court document, Blair said, “Did I like it, no, I didn’t. But, he asked me for help, I helped him.”

Prosecutors dropped a charge against Booker of attempting to provide material support to the Islamic State group, but he acknowledged trying to do so in court.

Booker plotted the bombing with two contacts who actually were confidential FBI sources. During his February court hearing, Booker said he was taking medication for bipolar disorder, characterized by mood swings that can affect functioning.