Judge to church: Build us an Ark! - The Horn News 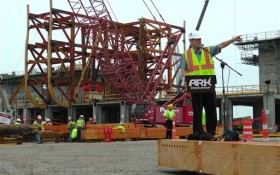 A religious group building a massive Noah’s Ark tourist attraction in Kentucky has won a legal battle over the state’s withdrawal of a potential tax incentive worth millions.

A federal judge ruled Monday that Kentucky officials violated the ark builders’ First Amendment protections by blocking it from the sales tax tourism incentive that could have been worth up to $18 million.

The Ark Encounter, being built by Christian group Answers in Genesis, is due to open in July.

U.S. District Judge Gregory Van Tatenhove ruled the state’s Tourism Cabinet cannot exclude the ark attraction from the incentive based on its “religious purpose and message.” The state initially celebrated the project but reversed course in late 2014.

Answers in Genesis founder Ken Ham says the ruling is a “victory for the free exercise of religion in this country.”

“The state gave us no choice but to bring this legal action,” Ham said in a release Monday night. “We, along with our attorneys, tried for many months to show these officials why their actions were blatantly violating our rights under the federal and state constitutions.”

State tourism officials, under former Kentucky Gov. Steve Beshear, said they chose to block the $90 million attraction from the incentive in late 2014 after seeing statements from website postings and investor meetings that indicated the park would “be an extension of (Answers in Genesis’) ministry.”

Republican Gov. Matt Bevin, who took office in December, has said that he supports tax incentives for the project.

Answers in Genesis filed the federal lawsuit in February.

Lawyers for the group argued in a court hearing in July that they should not face different treatment for the incentive just because the attraction would have religious themes. They asked the court to grant a temporary injunction against the state.

Van Tatenhove agreed, writing in the Monday ruling that because the tourism incentive “is neutral, has a secular purpose, and does not grant preferential treatment to anyone based on religion, allowing (Answers in Genesis) to participate along with the secular applicants cannot be viewed as acting with the predominant purpose of advancing religion.”

The incentive allows major tourism projects in Kentucky to recover 25 percent of development costs through sales tax rebates. It has been awarded to bourbon distilleries, hotels and a speedway that hosts a NASCAR race.

The Ark Encounter, with a 510-foot wooden ark as its centerpiece, is due to open July 7 in Williamstown.