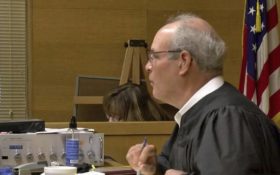 A judge was shot and wounded Monday morning as he walked toward his county’s courthouse, and a suspect was killed after a probation officer returned fire, officials said.

Steubenville City Manager James Mavromatis tells WTOV-TV that Bruzzese was talking after being wounded. He was flown to a Pittsburgh-area hospital.

Investigators didn’t immediately release further information about the judge’s condition or the suspect. Gov. John Kasich said he was told the judge would survive.

The attack had to be intended because people know about the reserved spots where judges park, said one of Bruzzese’s judicial colleagues.

Judge Joseph Corabi said he and the county’s two other judges park in reserved spots next to the courthouse in eastern Ohio. Judges then walk a few feet down what’s known as “Courthouse Alley” to a side entrance to the building, said Corabi, the Jefferson County juvenile and probate court judge.

“Everybody knows who parks there. That’s why it’s not an accident what happened. He was clearly an intended target,” Corabi said.

Corabi said Bruzzese is known as an avid hunter. He called him fair, hard-working, well-liked and “a tough son of a gun.”

“He is very intelligent and he can cut to the chase,” Corabi said. “He spots issues and he resolves the issues.”

Bruzzese has served on that court since 1997, according to Ohio Supreme Court records. He was most recently re-elected in 2014 for another six-year term.

Local media reported that the suspect’s body could be seen lying next to a car at the drive-thru of a neighboring bank. Police said a man who was in the car with the suspected shooter was taken into custody.

The courthouse was closed for the day as local and state authorities helped to secure the scene. Jefferson County Commissioner Thomas Graham told WTOV that some courthouse workers witnessed the “tragic situation” and that people would need time to process what had happened.