'Til crime does us part: Judge rules Cosby’s wife must testify - The Horn News 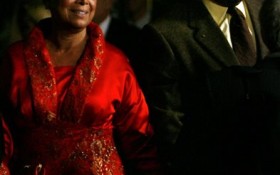 A federal judge in Massachusetts ruled Thursday that Bill Cosby’s wife must give a deposition in a defamation lawsuit against the comedian, but said she can refuse to answer questions about private marital conversations.

In the lawsuit, seven women claim Cosby defamed them by branding them as liars after they went public with accusations that he sexually assaulted them decades ago.

A lawyer for the women has sought to compel Camille Cosby to give a deposition. Last month, a magistrate judge rejected Cosby’s bid to quash the deposition subpoena.

The women’s lawyer, Joseph Cammarata, hoped to depose Camille Cosby on Feb. 22, but it was not immediately clear if that date is firm.

Camille Cosby’s lawyers praised the ruling. In a statement, they said the ruling affirms “the confidential nature of and protection afforded to marital communications.”

Cammarata has argued that since Camille Cosby has been married to Cosby for 52 years and was also his business manager, she could have useful information.

But since the judge ruled that she can refuse to answer questions about her private conversations with her husband, it is now unclear how much information she will supply.

In his ruling, Mastroianni said the right to refuse to answer certain deposition questions does not entitle someone to refuse to appear for a deposition altogether. The judge also said that the marital disqualification rule only applies to private conversations and there are exceptions, including when a third party was present and heard the conversation, if both spouses were jointly engaged in criminal activity or if the communication was written.

“Accordingly, in light of the relatively narrow scope of the rule, the existence of various exceptions, and (Camille Cosby’s) unique role in Defendant’s life for over fifty years, she may possess a good deal of relevant, non-protected information which can be uncovered in a deposition,” Mastroianni wrote.

The seven women suing Cosby for defamation are among about 50 women who have accused Cosby of sexual misconduct. He has denied their allegations.

Cosby, 78, was charged in December in Pennsylvania with drugging and sexually assaulting a former Temple University athletic department employee at his suburban Philadelphia home in 2004. He has pleaded not guilty. A judge last week denied a motion by Cosby’s lawyers to dismiss the charges and scheduled a preliminary hearing for March 8.