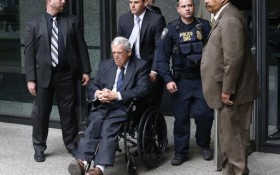 When he sentenced Dennis Hastert to more than a year in prison, the judge in the former House speaker’s hush-money case delivered the verbal equivalent of a public flogging.

Hastert, the nation’s longest-serving GOP speaker who for eight years was second in the line of succession to the presidency, sat almost frozen in a wheelchair, his head slightly bowed as he peered over his eyeglasses.

The judge drew special attention to the lies Hastert told federal investigators last year in a desperate bid to keep his dark secret hidden. And he portrayed Hastert’s fall from grace as traumatic, not only for his victims and their families, but for the country.

“Nothing is more stunning than to have the words ‘serial child molester’ and ‘speaker of the House’ in the same sentence.”

As he adjourned the two-hour hearing, Durkin added: “I hope I never see a case like this again.”

Had it not been for the statute of limitations on sex crimes running out long ago, the judge said, Hastert could well have been convicted of sexually abusing children. In that circumstance, he would probably have gone to prison for decades.

The judge did not say where Hastert would serve time when he reports later this year, but he cited one possibility — a prison in the Rochester, Minnesota, area, that already has many child molesters. In such a place, the judge said, Hastert would be less likely to be singled out by other inmates.

Defense attorney Thomas Green sought probation, saying Hastert had already paid an enormous toll in public shame. Defense attorneys had previously noted how Hastert’s portrait had been taken down from a Capitol Hill hallway shortly after his May 2015 indictment.

“Losing your good name is a punishment,” Durkin said. And Hastert’s name has been “obliterated.” But taking down a portrait from a place of honor is not comparable to the devastation endured by someone who is sexually abused as a child.

The defense also cited Hastert’s health, saying a blood infection nearly killed him in November and that a stroke has limited his mobility.

Durkin accepted that Hastert’s health had deteriorated since he pleaded guilty last fall. But the federal prison system, he said, holds inmates who are older and sicker. The other advantage of the Rochester-area prison, he explained, was that inmates could be treated at the acclaimed Mayo Clinic.

The judge, visibly angry at times, said Hastert’s duplicity will make it harder than ever for parents to trust other adults with their children.

Earlier this month, prosecutors went into graphic detail about the sex-abuse allegations, even describing how Hastert would sit in a recliner in the locker room with a direct view of the showers. The victims were boys between 14 and 17.

When the judge asked if Hastert wanted to make a statement, Hastert grabbed a walker and moved slowly to a podium.

“I am deeply ashamed to be standing here,” he said, reading from a statement. “I mistreated some of the athletes that I coached.”

He added: “They looked up to me, and I took advantage of them.”

Hastert pleaded guilty last fall to violating banking law as he sought to pay $3.5 million to someone referred to in court papers only as Individual A to keep the sex abuse secret.

When FBI agents first approached Hastert about the massive cash withdrawals, he told them Individual A was making a bogus claim of sex abuse to extort him for money.

“He was a victim decades ago, and you tried to make him a victim again,” the judge said.

Prosecutors have described the payments as something akin to an out-of-court settlement. Individual A wanted to bring in lawyers and put the agreement in writing, but it was Hastert, authorities said, who refused to involve anyone else.

Hastert, the judge said, thought he could use his elevated status to make federal investigators believe his lie.

“If he had told the truth, I’m not sure we would be here today,” Durkin said. “Instead, you lied and here we are.”

While the maximum sentence available for the banking violation was five years in prison, federal guidelines recommended probation to six months in prison. Judges rarely go outside the guidelines and usually do so only when the behavior underlying the crime — in this case sex abuse — is especially egregious.

In addition to the prison term, the judge also ordered Hastert to undergo sex-offender treatment, spend two years on supervised release from prison and pay a $250,000 fine to a crime victims’ fund.

Authorities say Hastert abused at least four students throughout his years at Yorkville High School about 45 miles southwest of Chicago.

Before Hastert spoke, a former wrestler delivered a statement. Taking a deep breath as he started, 53-year-old Scott Cross frequently stopped and struggled to regain his composure. A court official walked up and handed him a box of tissues.

“I looked up to coach Hastert,” he said. After Hastert abused him in the locker room, he said: “I was devastated. I felt very alone.”

Jolene Burdge also spoke. She said Hastert abused her brother, Stephen Reinboldt, throughout his years at Yorkville High, where Hastert was a history teacher and coach from 1965 to 1981. Reinboldt died of AIDS in 1995.

“When a man is sexually assaulted, it means they weren’t strong enough to fight back,” she said. “He wasn’t strong enough.” She added, “You took his innocence and turned it against him.”

By helping to reveal the sex abuse, she added, “I hope I have been your worst nightmare.”

In his remarks, the former congressman never referred to sexual abuse. When Hastert did not characterize what he’d done to the boys in his statement, the judge stopped him before he sat down and asked Hastert directly: Did Hastert, in fact, abuse Cross?

“I don’t remember that,” Hastert responded. “I accept his statement.”

The judge then asked if he had abused Reinboldt. Hastert first answered: “That was a different situation, sir.” After Hastert consulted his lawyer, the judge repeated the question. Hastert paused and said, “Yes.”

Assistant U.S. Attorney Steven Block said society was better off now that Hastert had been unmasked.

“The defendant,” he told the court, “has been exposed for who he is.”