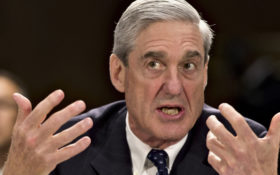 Special Counsel Robert Mueller’s request for an interview is nothing but a sneaky trap for President Donald Trump, warned a top judge.

If Trump answers Mueller’s request for questions, it could destroy his presidency.

Sponsored: Christian doctor finds mark from God in a woman’s…

That’s according to Judge Andrew Napolitano from Fox News. The judge wrote a scathing opinion piece for the cable news network Thursday after leaks revealed the 44 questions Mueller had submitted to Trump as part of the so-called “witch hunt.”

The questions are nothing but a trap, warned Napolitano, and there’s nothing to gain from an interview with Mueller. Agreeing to answer the special counsel’s questions would only hurt Trump and cause potential legal problems where none currently exist.

Even the smallest accidental misstatement during the interview would cause “one big headache of an indictment,” Napolitano warns. If Trump forgets some small fact, misspeaks, or omits a tiny detail, Mueller could use contradictory statements from other interviews to summon a grand jury.

Mueller and his team are even free to lie, deceive, and intentionally try to confuse the president to get him to trip up. One small mistake… and the trap is sprung.

“The Supreme Court has ruled that federal prosecutors and FBI agents can use trickery, deceptions and outright falsehoods — even disguises, verbal traps and fraud — to help them extract information from a witness or person they are investigating,” Napolitano wrote in his article. “Given the president’s well-known propensity to talk at length on many disjointed matters and to think both aloud and unfiltered … there is a very serious danger that he would contradict himself and even contradict facts for which the special counsel has hard evidence.”

So what should Trump do?

“He should go about the business of being president. He should do what is most difficult for him: stay silent,” Napolitano says. “Don’t trust a man who owns a grand jury. Don’t help him undo your presidency.”

The judge isn’t the only conservative figure that has lashed out over Mueller’s leaked questions this week.

After Mueller’s 44 questions submitted to Trump’s legal team were leaked to The New York Times this week, Fox News star Tucker Carlson was quick to respond.

Tom Fitton of conservative watchdog Judicial Watch joined Carlson, and he cut to the chase: The questions Mueller submitted to Trump are simply an “abuse of power” by the special counsel.

You can see the segment here. Then, vote below and share your opinion on the Mueller probe: Is it a witch hunt? Or a fair and nonpartisan investigation?