Judge brings down the HAMMER on disgraced pedophile - The Horn News 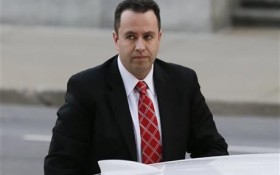 Jared Fogle emerged from obscurity to become the unlikely face of one of the nation’s biggest restaurant chains, earning a small fortune by touting the benefits of a healthy lifestyle that included Subway sandwiches.

But his wholesome public image was only that, and on Thursday he was sentenced to more than 15 years in prison for trading in child pornography and paying for sex with underage girls.

Fogle, 38, sought leniency, apologizing to his victims and telling the court in a tearful statement that he was raised with good values by a good family, but succumbed to self-centered “deception and lies.” He said he wished he had realized long ago that he had a problem.

“I had become dependent on alcohol, pornography and prostitutes,” he told the judge. “… I want to redeem my life. I want to become a good, decent person. I want to rebuild my life.”

Judge Tanya Walton Pratt wasn’t swayed, though, and gave him a harsher sentence than the 12½ years that prosecutors had sought. She also ordered him to submit to a lifetime of post-prison supervision and fined him $175,000.

“What a gift, to have such a professional windfall fall in your lap,” Pratt said, referring to the lucrative deal Subway gave Fogle after he lost more than 200 pounds in college, partly by eating its sandwiches. But she said Fogle blew the chance he’d been given by living a double life and pointed out that the crimes he committed weren’t victimless.

“The level of perversion and lawlessness exhibited by Mr. Fogle is extreme,” said Pratt. She recommended Fogle receive sex offender treatment in prison and said she’ll recommend he serve his time at a federal lockup in Littleton, Colorado, that specializes in such treatment.

As he was being led from the courtroom in handcuffs, the father of two blew kisses to crying relatives.

Fogle pleaded guilty to one count each of traveling to engage in illicit sexual conduct with a minor and distribution and receipt of child pornography, per a deal he struck with prosecutors in August, a month after authorities raided his suburban Indianapolis home.

Fogle’s lawyers and relatives left court without speaking to the media, and his attorney Ron Elberger did not respond to a question about whether Fogle will appeal his sentence.

In arguing for a five-year prison term, Fogle’s attorney Jeremy Margolis told Pratt that Fogle is ready for prison and has “lost his wife, he’s lost the children he loved and he’s not going to see them for years and years and years.”

“No one wants to be Jared Fogle. He is one of the most despised individuals in America,” Margolis told the judge.

Assistant U.S. Attorney Steven DeBrota, who handled Fogle’s prosecution, said he was pleased with the sentence and said Pratt made “a thoughtful explanation of why she thought the right answer was 188 months.”

DeBrota said that while some speculated that Fogle’s wealth and celebrity would help him get a shorter sentence, the judge rejected that suggestion, as well as arguments by Fogle’s attorneys that his notoriety and wealth would place him under added stress in prison.

“She flat out rejected the argument that wealth helped him any way here,” he said.

The hearing offered new details about Fogle’s transgressions and his life in recent months.

John Bradford, a professor of forensic psychiatry at the University of Ottawa in Canada, testified by phone that he analyzed Fogle in August and concluded he suffers from hypersexuality, mild pedophilia, and alcohol abuse and dependency.

He said Fogle told him that he had “a fairly extensive history” of using prostitutes for sex and paid a minimum of about $12,000 a year for sex. He also said Fogle’s main interest was young females but that he also had some interest in adolescent males, and that Fogle told him he masturbated to fantasies about prepubescent girls but that there was no evidence he “actually engaged in sex” with such children.

Bradford said Fogle apparently had a compulsive eating disorder before he lost all of the weight that led to him becoming the face of Subway, and that his hypersexuality seemed to develop shortly after he shed the extra pounds.

Rick May, a psychologist from Aurora, Colorado, told the court he treated Fogle at his clinic over a four-week period and that Fogle had responded to those treatments. But he said Fogle needs much more therapy and he would be willing to continue to treat Fogle if he is sent to the prison in Littleton.

In his plea deal, Fogle admitted that he had sex at New York City hotels with two girls under age 18 — one of whom was 16 at the time — and paid them for that sex. He also acknowledged receiving child pornography produced by Russell Taylor, the former executive director of The Jared Foundation, a nonprofit Fogle started to raise awareness and money to fight childhood obesity.

Authorities said Taylor secretly filmed 12 minors as they were nude, changing clothes, or engaged in other activities using hidden cameras in his Indianapolis-area residences to produce child pornography. Taylor has agreed to plead guilty to child exploitation and child pornography charges and faces a Dec. 10 plea hearing on those charges.

Fogle agreed to pay a total of $1.4 million to his 14 victims, with each getting $100,000. Before Fogle entered his guilty pleas Thursday, one of his attorneys told the judge that Fogle had paid 12 of the 14 victims and turned over the checks for the last two victims before the proceedings began.