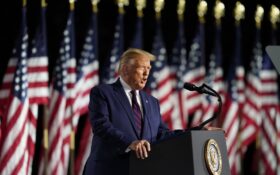 President Donald Trump’s campaign vowed to fight for the integrity of the 2020 election, which the mainstream media called in favor of Democratic presidential candidate Joe Biden on Saturday.

On Thursday, his legal team scored their first major victory.

A judge ruled in favor of the Trump campaign in the key battleground state of Pennslyvania, ordering the state not to count certain ballots that couldn’t be verified, or were verified too late.

The judge also determined that Secretary of the Commonwealth Kathy Boockvar overstepped her legal boundries by extending certain deadlines.

After the Pennslyvania Supreme Court ruled that mail-in ballots could be received and counted up to three days after Election Day, Boockvar extended the date for verifying certain ballots using voter identification by three days, to Nov. 12th.

The Trump campaign’s lawsuit said there was no legal reason for Boockvar to extend this identification deadline.

In the court ruling, the judge ruled in favor of the Trump campaign’s arguments. She concluded that those mail-in ballots not verified by voter identification by Nov. 9th must be discarded.

“The Court concludes that Respondent Kathy Boockvar, in her official capacity as Secretary of the Commonwealth, lacked statutory authority to issue the November 1, 2020, guidance to Respondents County Boards of Elections insofar as that guidance purported to change the deadline … for certain electors to verify proof of identification,” Judge Mary Hannah Leavitt ruled.

“Accordingly, the Court hereby orders that Respondents County Boards of Elections are enjoined from counting any ballots that have been segregated … [by] special injunction.”

This is the campaign’s second legal victory in the Keystone State. Trump’s campaign has filed at least 15 different lawsuits in Pennslyvania, and could file more in the days ahead.

Each of these lawsuits will be difficult, and wins are critical for the embattled Trump campaign that remains over 50,000 votes behind, according to the official count.

Thursday was an important first step if Trump hopes to return to the White House.