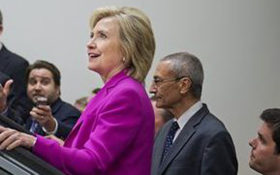 If the government ever gets around to investigating Hillary Clinton for her ties to Russia, she potentially faces serious jail time. And a new report shows that if she’s heading to jail, she won’t be going alone.

Her former campaign manager, John Podesta, would end up on trial with her, according to an article recently published by The Daily Caller.

When he began working for the Obama White House in 2013, Podesta covered up the fact that he owned 75,000 shares of a Russian-linked company, the report says.

That’s a clear violation of the law, experts all over the political spectrum agree – possibly one that would have given Russia leverage over American intelligence.

Podesta has fiercely denied the allegations. Since the publication, Podesta’s lawyers have sent The Daily Caller a “cease-and-desist” letter and called the report “false and libelous.”

According to the original report, which remains online at the time of publishing, it all began in 2010 when Podesta, whose embarrassing e-mails helped doom Hillary’s presidential campaign, joined the board of a company called Joule Unlimited Technologies. Podesta served on the board with three Russian executives, including the CEO of Rusnano, a Russian firm with close links to Vladimir Putin. It gave Joule Unlimited $35 million. Joule then allegedly gave Podesta 75,000 shares of stock.

Three years later, when Podesta left to go to work as a special Counselor to President Obama, he was supposed to reveal any financial conflicts of interest, especially with foreign countries.

Instead, Podesta allegedly did what Clinton and Obama officials do best: He lied through his teeth.

When he filed the government document – form 278 Schedule B — he left the entire section about stock ownership blank!

Not only that — he didn’t even transfer the stock out of his direct control, the report states.

Podesta was supposed to divest himself of commercial interests in December 2013. But he only transferred 33,693 shares of Joule stock to Leonidio Holdings, a trust he set up to manage his stocks while he was in the government. But the majority of this Russian-linked stock – 41,000 shares – apparently stayed under his control.

Critics say that’s not an oversight, and it’s not an accident. That’s a crime. It could have even undermined national security.

Ron Hosko, a former FBI assistant director told The Daily Caller that this kind of foreign hanky-panky could have “become a counterintelligence concern for America.”

Under Title 5 of the U.S. Code, the government could fine him $50,000 for each violation. But don’t hold your breath on that.

Podesta is an old hand inside Washington. He was chief of staff to Bill Clinton, and The Washington Post called him “the backbone of Obama’s second term” — where he came up with Obama’s strategy to run the country by executive order. In between White House gigs, he founded the Center for American Progress (CAP) — an ultra-leftist think tank funded by shadowy billionaire globalist George Soros.

Let’s not forget that the investigation office is run by the same government bureaucrats who are undermining Donald Trump every waking hour – illegally leaking his conversations and unmasking classified intelligence to make it look like Trump is the one who is linked to the Kremlin.

Donald Trump called attention to this in a series of tweets on Monday, saying the country should be investigating Bill and Hillary Clinton. Hillary was part of the decision to sell 20 percent of U.S. uranium to Russia – to enrich a company that gave the Clinton Foundation tens of millions of dollars.

And Bill gave 215 speeches while Hillary was secretary of state — including two in Russia that netted him a cool $625,000.

But the press try to make it look like Trump is the one tied to Russia because of ties from Paul Manafort, the RINO who briefly ran his presidential campaign. Trump and his grassroots team clashed with him, and Trump threw Manafort out on his ear.

Now, the evidence shows that the government should throw Podesta and Hillary into a cell.