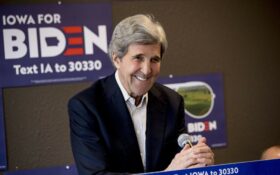 John Kerry is taking his role as the U.S. environmental “czar” very seriously.

In fact, reports say he’s using his influence to privately pressure big banks toward his liberal agenda… and waging war on the coal industry.

But Republicans across the country aren’t giving up without a fight.

And they just banded together to make a major step toward ruining Kerry’s plan.

It all started when Kerry — in an effort to reduce carbon emissions in the U.S. — pressured banks to stop lending to and investing in fossil fuel companies. According to a Politico report, Kerry is massaging his personal relationships with Wall Street in order to get banks to “de-carbonize.”

That prompted 15 Republican state treasurers across the country — including states such as West Virginia, Pennsylvania, Kentucky, and Oklahoma — to pen a personal letter to Kerry with a demand of their own.

The GOP treasurers threatened to pull their billions-worth of assets from the big banks altogether.

Among the 15 state treasurers signing the letter, according to Axios, $600 billion is at their disposal.

The assets would be a major loss for big banks.

The states and banks reportedly work together to invest and grow assets, which are then repurposed to go toward “state spending and retirement payments.”

West Virginia State Treasurer Riley Moore said the issue is a matter of life or death — as the coal industry is the major business in the state.

” … it is going to destroy us,” Moore said of Kerry’s policies.

And Moore claims he’s ready to stop doing business with big banks for the good of his own people in West Virginia.

“Frankly,” he said, “it is not fair for the people of West Virginia to allow a bank to handle our money when they’re diametrically opposed to our way of life.”

You can read the letter sent straight to Kerry’s office below:

We are writing today to express our deep concern with recent reports that you, and other members of the Biden Administration, are privately pressuring U.S. banks and financial institutions to refuse to lend to or invest in coal, oil, and natural gas companies, as part of a misguided strategy to eliminate the fossil fuel industry in our country.1 As members of the U.S. Senate Banking Committee have noted,2 these efforts to secure extralegal commitments from financial institutions will discriminate against law-abiding U.S. energy companies and their employees, impede economic growth, and drive up consumer costs.

As a collective, we strongly oppose command-and-control economic policies that attempt to bend the free market to the political will of government officials. It is simply antithetical to our nation’s position as a democracy and a capitalist economy for the Executive Branch to bully corporations into curtailing legal activities. The Biden Administration’s top-down tactics of picking economic winners and losers deprives the real determinate group in our society – the people – of essential choice and agency. We refuse to allow the federal government to pick our critical industries as losers, based purely on President Biden’s own radical political preferences and ideologies. At the outset of his administration, President Biden promised to be a president for all Americans. The pressure his Administration is imposing on American financial institutions runs directly counter to that promise, as it will certainly harm the most economically depressed areas in our states and the most vulnerable of our people.

The coal, oil, and natural gas industries in our states are vital to our nation’s economy. These industries provide jobs, health insurance, critical tax revenue, and quality of life to families across our country. As the Obama Administration’s War on Coal demonstrated, reckless attacks on the fossil fuel industry ultimately cut off paychecks for workers and take food off the table for hard-working middle-class families – the very people the Biden Administration claims to champion.

Therefore, we intend to put banks and financial institutions on notice of our position, as we urge them not to give in to pressure from the Biden Administration to refuse to lend to or invest in coal, oil, and natural gas companies. As the chief financial officers of our respective states, we entrust banks and financial institutions with billions of our taxpayers’ dollars. It is only logical that we will give significant weight to the fact that an institution engaged in tactics that will harm the people whose money they are handling before entering into or extending any contract.

For the above stated reasons, we strongly oppose the Biden Administration’s efforts to cut off financing for law-abiding industries that are essential to the economy and our citizens’ way of life. Thank you for your consideration in this matter.