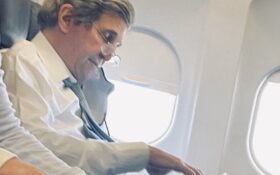 John Kerry, the top U.S. envoy at this year’s U.N. climate talks in Egypt, has tested positive for COVID-19, a spokesperson said late Friday night, another potential setback for negotiations that were already going into overtime with no result in sight.

“He is fully vaccinated and boosted and experiencing mild symptoms. He is working with his negotiations team and foreign counterparts by phone to ensure a successful outcome of COP27,” spokesperson Whitney Smith wrote in a statement late Friday.

Kerry’s illness was sure to add to worries about the negotiations, which had been scheduled to end Friday. A former U.S. senator and secretary of state, Kerry has deep relationships with leaders around the world and carries a lot of weight in international talks. His meetings in Sharm el-Sheikh with China’s climate envoy Xie Zhenhua were closely watched for signs that the world’s two biggest polluters might agree a deal that would boost the overall talks.

Negotiations, at least those in public, hit a lull Friday afternoon as news conferences and plenaries were postponed or cancelled. Diplomats said they hoped for late night progress and changed airline reservations so talks could continue.

Delegates said there was some headway being made, especially on the most difficult sticking point. That’s the issue of rich industrialized nations providing money to vulnerable countries suffering from ‘loss and damage’ as a result of climate-related disasters.

“I think we’re in for a bit of a long haul,” World Resources Institute international climate director David Waskow said. “Loss and damage sits at the center in terms of what needs to be done to get this over the finish line.”

The United States appeared isolated in opposing a dedicated loss and damage fund after the European Union produced a surprise offer on the issue Thursday. But a State Department official confirmed that negotiations on the issue were ongoing.

A group of developing nations known as G-77 and China have insisted on a fund being established at the meeting and remained outwardly united on the issue late Friday.

Other delegates at the talks expressed hope that a deal might still be possible.

“We are very busy and they’re making some progress and they’ve gotten some clarity on all positions,” Molwyn Joseph, who spoke on behalf of small island states, told The Associated Press.

“There is the possibility that we could get an outcome, but also it could fall over at the last minute,” said New Zealand’s Climate Change Minister James Shaw. “And I think if that happened, it would be a real shame because this is as close (on loss and damage) as we’ve ever been before.”

Climate activist Nakeeyat Dramani Sam of Ghana chided delegates at this year’s U.N. climate talks, saying they would act faster to rein in global warming if they were her age.

“It is an emergency,” the 10-year-old told negotiators, holding a sign that read “Payment Overdue”. “If all of you were to be young people like me, wouldn’t you have already agreed to do what is needed to save our planet?”

But after receiving a standing ovation, it was back to nations squabbling over several thorny issues, with the Egyptian presidency acknowledging that the talks will go into overtime on Saturday, if not longer.

“Time is not on our side,” said Egyptian Foreign Minister Sameh Shoukry. Speaking as the summit’s chair, he pledged to try to find common ground going forward. “The global community is looking to us to be bold and ambitious.”

The EU proposal on ‘loss and damage’ payments Thursday would require emerging economies such as China — the second biggest historic polluter after the U.S. — to contribute to the fund.

“We’re making clear that Europe is on the side of the most vulnerable states,” German Foreign Minister Annalena Baerbock said. “Others can now show which side they are on.”

The EU proposal would also require stepped up efforts on reducing, or ‘mitigating,’ greenhouse gas emissions to slow global warming. It also adopts a call to phase down all fossil fuels — a measure first proposed by India and a dramatic step up from previous commitments to just phase down coal.

Unless emissions are cut more steeply, “no money in the world could pay for the damages and losses of the future,” Baerbock said.

EU climate chief Frans Timmermans said Friday that the bloc’s proposal on funding for loss and damage and mitigation is “a final offer” that seeks to “find a compromise” between countries as negotiators work out a way forward.

The environmental advocacy group Action Aid called the proposal a “wolf in sheep’s clothing” because it doesn’t go far enough.

The EU plan was a counter to a proposal made by the Group of 77 and China, which would create a fund but only require developed nations to contribute, excepting top polluters China and India.

China, which had been quiet during much of the talks, and Saudi Arabia both said the money for a loss and damage fund shouldn’t come from them. Developed countries should foot the bill, China said. Both also insisted that the 2015 Paris Agreement that aims to limit global warming to an ambitious 1.5 Celsius (2.7 Fahrenheit) increase should not be altered, which can be interpreted as not strengthening efforts.

A senior official from the Maldives voiced growing frustration at the way vulnerable countries keep getting caught up in battles between more powerful nations at the talks, even as their situation gets increasingly dire due to climate change.

“Small island states have just 86 months and we’re already feeling it,” the official said, referring to scientists’ calculations that greenhouse gas emissions have to be halved by 2030. “We can’t be sandwiched between global powers.”

Friday’s draft of the overarching decision on the outcome of the talks, issued by the Egyptian presidency, includes some vague references to reform to multilateral development banks but did not include or make reference to the detailed Bridgetown Initiative on financial reform from Barbados and its Prime Minister Mia Mottley.