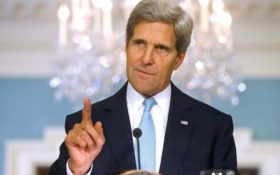 In many ways, former Secretary of State John Kerry’s career has closely mirrored his political ally and friend, Hillary Clinton.

Both served as secretary of state under former President Barack Obama. Both have used their incredible wealth to advance their political ambitions. Both have failed presidential campaigns on their resume.

In recent years, conservatives have even called for Kerry and Hillary to both be arrested for illegal “shadow diplomacy” deals.

Democratic Party insiders have begun whispering that Kerry is seriously considering a second attempt to secure the White House. When CBS News asked Kerry about it over the weekend, he refused to deny the growing rumors.

In the high-stakes Washington, D.C. political theater, beyond a formal campaign rally, that’s as clear message by Kerry. He wants the Oval Office, and he’s starting to build up his political support.

He’s just not ready to field questions yet, even from the friendly mainstream media.

“Talking about 2020 right now is a total distraction and waste of time,” Kerry told CBS when asked if he’d run for president again. “What we need to do is focus on 2018.”

The rumor even reached the Trump administration — and the president himself responded on Monday.

I see that John Kerry, the father of the now terminated Iran deal, is thinking of running for President. I should only be so lucky – although the field that is currently assembling looks really good – FOR ME!

What are your thoughts on Kerry’s rumored 2020 ambitions?

Vote here in our poll —