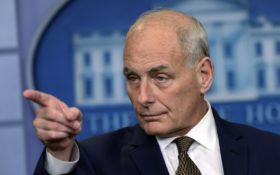 A Democratic politician and public school teacher used his classroom to smear U.S. soldiers as “dumbsh—s” and the “lowest of our low.”

But he’s still being paid to “teach,” he’s still on city council, and his friends on the school board told parents who objected to shut up.

President Donald Trump’s Chief of Staff, retired General John Kelly, was not going to be shut up — this four-star general slammed the ignorant teacher for his belittling attack.

It all began when two students wore shirts with the Marines logo to El Rancho High School in Pico Rivera, a little town just outside Los Angeles.

That triggered their teacher, Gregory Salcido, who launched into a profanity-laced tirade in the middle of class.

One of the students, who recorded the whole thing on his cell phone, said serving in the military is a “family tradition.”

But Salcido, who teaches history and government, insulted the kid’s family – and every single soldier protecting America in the War on Terror.

“Think about the people who you know who are over there – your freaking stupid Uncle Louie or whatever,” he said. “They’re dumbsh–s.”

“They’re not academic people, they’re not intellectual people. They’re the freakin’ lowest of our low,” he ranted.

The only reason people join the military, Salcido said, was “because you had no other options,” because “you didn’t take care of business academically”…and “because your parents didn’t love you enough.”

The video went viral after a friend of his mother’s posted it on Facebook – and Salcido got slapped down by one of the highest-ranking generals serving in the U.S. government.

Kelly, did not mince words.

“I think the guy ought to go to Hell, I just hope he enjoys the liberties and the lifestyles that we fought for.” he said.

The city’s mayor has also condemned Salcido’s words and removed him from all council committees.

But the school district has circled the wagons around Salcido – and told outraged parents who wanted some answers that they can sit down and shut up!

The El Rancho Unified School District put Salcido on administrative leave – which means he’s paid to stay at home and do nothing.

Then school board members refused to listen to comments from veterans and flag-carrying patriots in the community who demanded Salcido be sent packing at their last meeting.

“We will not entertain public comments that are not part of the agenda,” said the school district president on Tuesday night. Conveniently, Salcido wasn’t on the agenda.

When the parents started to rumble, she told them, “As your elected officials, you need to give us an opportunity to talk.”

No, as their elected servants, you need to shut up and listen.

But the school board president shares the same radical left-wing politics as Salcido. She’s praised people who made “Donald Trump piñatas.”

The school suspended him twice before, when he threatened to kill a teenage girl for talking – and when he hit a 15-year-old boy in the back of the head for dozing off in his class. He admits both acts but says they were overblown.

Salcido’s power and position probably didn’t hurt, either. He’s been a member of city council for 19 years and served as mayor three times.

He also ran for Congress in 2002 – as a Democrat. Surprise, surprise.

His insulting, ignorant view of our military is shared by the most powerful figures in the Democrat Party. At the height of the Iraq War, John Kerry said that people who don’t do well in school would “get stuck in Iraq.”

Only idiots, beggars, and losers serve in the military, according to them. But Kerry, Salcido and their buddies are dead wrong about the people who serve in the U.S. armed forces.

92 percent of enlisted military personnel have completed high school and some college. That’s way higher than 60 percent national average, according to Pew Research.

And almost 90 percent of soldiers say they joined for one reason: to serve and protect their country. The least we can give them is our respect.

Call the El Rancho Unified School District at (562) 801-7300 (or e-mail them), and tell them Gregory Salcido has no business teaching young, impressionable children.