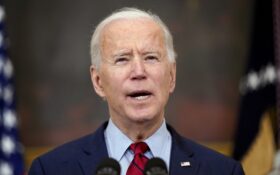 The sudden and rapid onset of the Omicron variant has put the Biden administration on the brink with one of its key constituencies: unions.

In short, Biden wants schools open despite the surge in coronavirus cases.

But the unions in many areas want to shut down again – and they’re being very vocal about it.

The Chicago Teachers Union voted to move back to distance learning, which led to mass cancellations – and they intend to keep out of the classrooms until COVID-19 infections “substantially subside,” or until they win new safety standards.

Biden seemed to be losing patience – but stopped short of criticizing the teachers or the union directly.

However, he also didn’t miss a chance to tout one of his few legislative victories in the process.

“You know, they have what they need,” Biden said of the schools, according to the New York Post. “Because of the American Rescue Plan … that I signed in March, we provided the states with $130 billion — with a “B” — billion to specifically keep our students safe and schools open. Funding for ventilation — ventilation systems in the schools, social distancing in classrooms, even larger classrooms, on buses and — everything from bus drivers to buses — the actual bus.”

That has some wondering just what the teachers in Chicago are holding out for.

“The union is demanding the city spend even more money for a safer work environment, but the city of Chicago already got $2 billion in COVID funds for schools,” Fox News host Jesse Watters said this week. “So, what happened all the money?”

On the same show, Geraldo Rivera called the shutdown “a teachers union ambush.”

“I’m generally pro-union,” he said. “But this walkout, it was clumsy, it was spiteful, it was absolutely devastating for these children’s well-being. Where are they going to eat, some of these families now. I think it’s absolutely awful.”

Indeed, experts have said that the year or more of school closures early in the pandemic caused children to fall behind, not just in their education but in their mental health and social wellbeing.

And at-risk students from vulnerable homes who have greater needs have suffered even more.

Yet Chicago isn’t the only place where teachers are taking matters into their own hands.

On the other side of the country, close to 1,000 teachers and aides – 20 percent of the workforce – missed school in San Francisco this week.

Some may have missed due to actual infection.

But others have made it clear they don’t want to be in the classroom in current conditions and staged a sickout.

“By withholding our labor, by reclaiming our time and our health, we send the message that if SFUSD, the City, State, and Federal Government do not invest in seriously addressing this pandemic (and the ongoing issues which make dealing with the pandemic so challenging for public schools), we can shut the whole system down. And we will!” they wrote online, in what is not being billed as an official union action.

In Los Angeles, the union is trying to use the Omicron surge to win other concessions.

According to the Washington Examiner, they’re calling for a district shutdown until they can get more protective gear as well as a promise to open no new charter schools, which is unrelated the pandemic issues.

The Wall Street Journal is calling on Biden to take a tougher line with the teachers.

But the newspaper noted he has a built-in conflict of interest given how vital union support was to his election campaign.

“As for Mr. Biden, whose side is he on?” The newspaper asked.

“The students whom he says will be safe in class according to all of the science? Or the unions who backed him politically but are doing terrible harm to America’s school children, including 330,000 of them in Chicago this week?”

The nation could find out in the coming weeks.