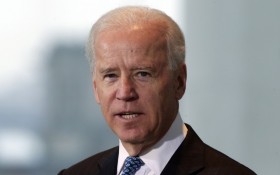 For decades, former Vice President Joe Biden, D-Del., has dreamed of sitting in the Oval Office with his name on the big desk.

After failed presidential runs in 1984, 1988, and 2008, Biden is finally the frontrunner to win the 2020 Democratic presidential primary and take on President Donald Trump.

But a 24-year-old quote about Attorney General William Barr could turn Biden’s fourth presidential run into another nightmare.

Barr is under attack by every Democratic presidential candidates, and is loathed by the core Democratic voters — but he’s someone Biden showered with praise just a few years ago.

In fact, in 1995 Biden called Barr one of the greatest attorney generals in the history of the United States.

“As I know you know, but others should know, too, I truly enjoyed working with you when you were attorney general,” Biden said to Barr, who had previously served under former President George H.W. Bush.

“You were one of the best I have ever worked with,” Biden said. “And there have been a lot of attorneys general since I have been here. I mean that sincerely.”

Barr, who was in the private sector at the time, was testifying in front of the Senate on a hearing about “enhancing the effectiveness” of prison. Biden was the highest ranking Democrat on the Senate Judiciary Committee.

Of course, 1995 wasn’t the only time Biden has praised Barr for being fair, candid, and honest. Even in a Democrat-controlled Senate, Biden showered Barr with compliments for his integrity when being confirmed as attorney general.

Barr told the Democrat-controlled Senate during his confirmation hearings that the 1973 Supreme Court decision Roe v. Wade should be overturned. Barr argued that the decision “foreclosed any kind of role for society to place regulations on abortion.” and felt abortion was an issue “for state legislatures to deal with.”

Biden said he disagreed with Barr’s opinion — but complimented him for giving “the first candid answer anyone has given on Roe v. Wade that I can remember in God knows how many years.”

“Thank you for being candid with us,” Biden repeated. “We’ve become accustomed to the lack of candor, and I appreciate it very much.”

Now that he’s running for president, of course, Biden has different things to say about Barr —

Once Democratic voters find out what Biden really thinks of Barr, will they kick him to the presidential curb for the fourth time?

Or will Biden be allowed to flip-flop again?

[Must read] Nancy Pelosi trying to hide THIS bombshell from William Barr!?