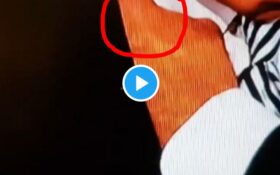 Was Biden wearing a wire at the debate to help him get answers?

The short clip gained traction after Hollywood star James Woods, an outspoken conservative and backer of Trump, shared it on his Twitter account.

“And there it is,” Woods tweeted with the hashtag #JoeWired.

So was Biden actually wired, as the clip claims?

While the video is entertaining, it’s also unlikely to be true.

Critics dismissed the clip, and said the slowed-down video only shows a crease in Biden’s shirt.

#JoeWired is just #fakenews. The supposed wire is just a cloth wrinkle… pic.twitter.com/WGmcfasDBe

Still, the conspiracy theory that Biden was cheating during the debate quickly gained steam on social media.

Wednesday morning, Woods’ hashtag #JoeWired was one of the hottest trending subjects on the social media website.

Other viewers went further. They spotted an unusual part of Biden’s outfit under his left cuff and claimed it was either a wire… or a serpent.

This conspiracy was easier to debunk.

It wasn’t a wire (nor a small snake).

Biden regularly wears rosary beads on his left wrist in honor of his son, Beau Biden, who passed away in 2015.

The content of the debate between Trump and Biden was heavily panned after it deteriorated into bitter taunts and near chaos Tuesday night.

Trump repeatedly interrupted his opponent with angry — and personal — jabs. Biden eventually responded with his own taunts and demanded at one point the president “just shut up” and “shush.”

It was the most chaotic presidential debate in modern history, and Fox News’ Chris Wallace failed to maintain control as the moderator.

There were heated clashes over the president’s handling of the pandemic, the integrity of the election results, deeply personal attacks about Biden’s family, and a near shouting match on how the Supreme Court will shape the future of the nation’s health care.

The belligerent tone was persistent but somehow fitting for what has been an extraordinarily ugly campaign.

With just five weeks until Election Day and voting already underway in some key states, Biden has maintained a lead in many national polls and in many battleground states. The Trump campaign has repeatedly questioned the validity of those polls.

It’s unclear whether the debate will do much to change any voter’s minds… wire or not.