Joe Biden won't like this at all... - The Horn News 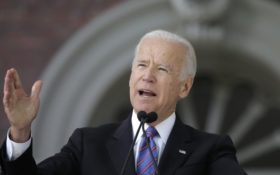 It may be the most vicious attack Democrats have ever made against President Donald Trump during his four years in office. They claimed the president knew Russia was paying Taliban insurgents in Afghanistan a “bounty” for every American soldier they’d kill — and Trump did nothing to stop it.

The New York Times cited anonymous sources when it broke the story this summer, and highest-ranking officials of the Democratic Party immediately accused President Trump of “putting U.S. troops’ lives at risk” and toadying up to Vladimir Putin.

Now, it turns out, the entire story is false.

“All the defense intelligence agencies have been unable to corroborate that report,” Defense Secretary Mark Esper told a special hearing of the House Armed Services Committee in July.

Gen. Frank McKenzie told NBC News that “there’s a lot of conflicting information” about the story, “but nothing was out there that I could grasp that connect together in a pattern.”

The original Times story set off a thunderstorm of criticism, with Democrats all but claiming that President Trump has blood on his hands.

“The commander in chief of American troops, serving in the dangerous theater of war, has known about this for months, according to the Times and done worse than nothing,” Joe Biden said. “Not only has he failed to sanction or impose any kind of consequences on Russia for this egregious violation of international law, Donald Trump has continued his embarrassing campaign of deference and debasing himself before Vladimir Putin.”

The leaders of the Democratic Party followed suit.

“This is as bad as it gets, and yet the president will not confront the Russians,” said Speaker of the House Nancy Pelosi.

The San Francisco liberal hinted that Putin had blackmailed Trump. “I don’t know what the Russians have on the president,” she said, “politically, personally, financially, or whatever it is.”

Her California colleague, Rep. Ted Lieu, accused Trump of “putting US troops’ lives at risk by doing nothing.”

“Lack of a response by (Trump) suggests he may be beholden to Putin,” Lieu tweeted. “I find this behavior by our Commander in Chief to be unacceptable.”

Hillary Clinton’s 2016 running mate, Sen. Tim Kaine of Virginia, tweeted that “Trump was cozying up to Putin and inviting him to the G7 all while his administration reportedly knew Russia was trying to kill US troops in Afghanistan and derail peace talks with the Taliban.”

It wasn’t just Democrats who piled on the president. “Never Trumper” John Weaver, a GOP insider who founded the anti-Trump Lincoln Project, tweeted: “Trump knew Russia was paying bounties on the lives of American servicemen in Afghanistan. He took no action against Putin. Instead, (Trump) REWARDED Putin by trying to insert Russia back into the G-7.”

Rep. Liz Cheney, R-Wyo., a leading foreign policy interventionist in the GOP, said the “White House must explain” itself. And she asked the Watergate-era question, “Who did know and when?”

The White House always said the “Russian bounty” tale amounted to “another fabricated Russia Hoax.” And the intelligence community “did not find this info credible, and therefore did not report it to me or” Vice President Mike Pence.

The national security apparatus stood up behind the president at the time.

“The president’s career CIA briefer decided not to brief him because it was unverified intelligence,” National Security Adviser Robert O’Brien said, “because she didn’t have the confidence in the intelligence that came up.”

Director of National Intelligence John Ratcliffe also “confirmed that neither the President nor the Vice President were ever briefed on any intelligence alleged by the New York Times in its reporting.”

Now we know that, after The New York Times printed the story in late June, the top military leaders examined all the evidence—and found that it didn’t add up.

Now that the intelligence has come to light—and shows that it was the media who lied, not the commander-in-chief.