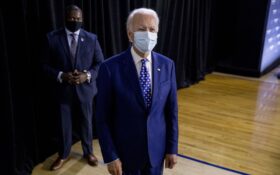 Democratic candidate Joe Biden is facing calls to suspend his presidential campaign after President Donald Trump and First Lady Melania Trump were both diagnosed with coronavirus on Thursday.

With just 32 days until the general election, critics are calling for the Biden campaign to suspend operations until Trump has recovered from the illness and can leave isolation.

After Trump’s diagnosis was made public, Collins proposed the idea for CNN host Don Lemon.

“It’s going to raise a lot of questions about the campaign as well, and the future of that,” Collins said about Trump’s illness. There are just “13 days away is the next presidential debate. Obviously, that is shorter than the 14-day quarantine. If that happens, there are still questions about how the president will be tested when they will decide he’s cleared from coronavirus, and really how the next two weeks look for him.”

“If he does develop symptoms, if he does not start to feel well like his doctor says he does today,” his quarantine could even be longer.

The White House is reporting that Trump is experiencing mild symptoms. The president canceled his only public event today, a virtual meeting on COVID-19 and seniors.

Trump’s illness “raises questions about Joe Biden’s campaign too … and whether or not he’s going to suspend his campaign. Thinking back, someone much smarter than me pointed out tonight that back in 1912 when Roosevelt, Teddy Roosevelt had been in an assassination attempt, Woodrow Wilson suspended his campaign and waited for him to recover,” Collins pointed out.

“So is this a situation like that, where the Biden campaign takes a step like that?” she asked. “Do they continue campaigning over the next few weeks knowing that the president can’t?”

Political analyst Jeff Greenfield also asked if it was appropriate for Biden to continue campaigning.

Does Biden suspend his campaign as Trump is quarantined? Is the White House failure to observe protocols a reason for Biden to continue his campaigning?

The idea quickly caught on among Trump supporters on social media, who called on Biden to suspend his campaign immediately until the president has recovered.

The Biden campaign has shown no signs of stopping, however. Immediately after his negative coronavirus test results were made public, Biden made his way to Michigan for a campaign event.

Supporters of the Democratic presidential candidate have pointed out that Trump didn’t suspend his campaign when his 2016 election rival, former Secretary of State Hillary Clinton, was sick with pneumonia.

As he should. Unlike Trump, Biden takes proper precautions. He’s responsible. Also, Trump didn’t suspend his campaign when Hillary became sick with pneumonia. Instead, Trump took to the stage, making fun of her being sick.