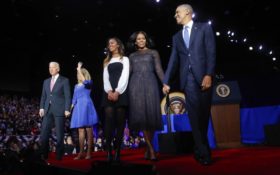 Former Vice President Joe Biden “sure would” like Obama to be his 2020 running mate at a recent campaign stop ahead of the Iowa caucus.

“The second question is: which Obama?” he asked, to which the crowd cheered.

“Well, I sure would like Michelle to be the vice president,” Biden said, laughing.

“They’re both incredibly qualified people, I mean, and they’re such decent, honorable people.”

You can view the conversation the two had below:

Detractors on social media were quick to scrutinize Biden’s comments.

“‘I’m falling in the polls so I’ll namedrop the Obamas again,'” @PoliticalJudo wrote.

Biden: “I’m falling in the polls so I’ll namedrop the Obamas again”

Others have also speculated that Biden’s referencing of the Obamas is a ploy to secure African American voters, an area of which Biden has unprecedented support compared to his Democratic rivals, according to Politico.

Trying to get the black vote. How about you get the nomination first. Michelle has already said she dont give a damn about Politics

“He’s emphatically not an ideas man,” Carlson then said of Biden.

Instead, the Fox News star suggested he was simply running on “electability” — the idea that only he can beat President Donald Trump.

In other words, Biden is running on the idea that he’s “Obama 2.0.”