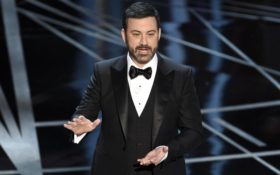 Kimmel made the comments in reference to a Twitter fight with Moore on Thursday.

It began when Moore took issue with Kimmel’s show sending a comedian to crash a talk Moore was giving at a south Alabama church Wednesday night.

Moore tweeted to Kimmel Thursday: “If you want to mock our Christian values, come down here to Alabama and do it man to man.” Kimmel replied : “Sounds great Roy – let me know when you get some Christian values and I’ll be there!”

On his show Thursday, Kimmel offered to go to Alabama to either talk about Christian values or fight for charity with the money raised going to Moore’s accusers.