Jimmy Carter announces he is cancer-free - The Horn News 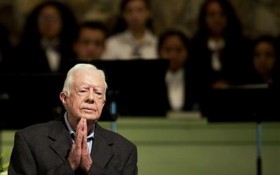 Former president Jimmy Carter revealed that his latest brain scan showed no signs of cancer four months after he had announced that melanoma had spread to his brain and that he was putting himself “in the hands of God.”

Carter first announced the news at the small church where he frequently teaches Sunday school in his hometown of Plains, Georgia, and then in a two-sentence written statement as word spread from Maranatha Baptist Church.

Carter always starts his lessons with a brief update on his recent activities. This week, that included a visit to his doctor to learn the results of an MRI brain scan. Previous tests found four lesions on his brain were still there but had responded to an August radiation treatment and regular doses of a recently approved drug called Keytruda to help his body seek out any new cancer cells.

“And when I went this week, they didn’t find any cancer at all,” Carter said, prompting gasps and applause from the congregation as he smiled slightly. “So I have good news.”

Such a clean scan for a melanoma patient would have been rare as recently as five years ago, experts on the disease said. Keytruda and other drugs classified as “immunotherapy” sometimes combined with radiation have dramatically changed success at treating melanoma, said Dr. Keith Flaherty, a melanoma specialist at Massachusetts General Hospital’s Termeer Center for Targeted Therapies who is not involved in Carter’s treatment.

“There’s no question it’s very positive,” Flaherty said. “It really is an uncommon thing to have lesions of any size resolved so completely and so quickly.”

It’s not clear what other scans Carter’s doctors at Emory University’s Winship Cancer Institute have performed. A spokesman declined comment Sunday due to patient privacy and Carter only mentioned a brain scan.

Dr. Len Lichtenfeld, deputy chief medical officer for the American Cancer Society, said doctors evaluating melanoma patients will use scans of body parts beyond where the disease has occurred to ensure it has not spread.

“For today, the news cannot be better,” Lichtenfeld said. “Circumstances may change over time or he may be in a situation where it does not recur for many years or at all.”

Carter said he will continue receiving doses of Keytruda every three weeks. That’s typical for patients taking the drug without side effects, said Dr. Douglas Johnson, a melanoma specialist at Vanderbilt-Ingram Cancer Center who is not involved with Carter’s treatment.

His doctors will continue to scan Carter’s body for any new cancer cell, a procedure typically repeated every three months for the first year or two after a patient’s test results show no cancer, Johnson said.

“The majority of patients can tolerate these drugs extremely well, even patients of an advanced age,” he said. “It’s very different from traditional chemotherapy.”

Carter has remained active during treatment, volunteering on a building project with Habitat for Humanity and continuing to work at The Carter Center, the human rights organization he founded after leaving the White House.

“I’ve reacted well to the treatments,” Carter told The Associated Press in November. “I haven’t been uncomfortable or ill after the treatments were over. So that part of it has been a relief to me and I think to the doctors. But the final result of how well the treatments are combatting or controlling the cancer, we don’t know yet.”

Jason Carter, Carter’s grandson, said he got the news Friday from his grandfather. Maranatha Baptist Church members learned along with Sunday’s guests, among hundreds drawn to the tiny church for lessons in the weeks since Carter’s August announcement.

Jill Stuckey, a Maranatha Baptist Church member, said in a phone interview that after Carter’s comments she went into the church’s back hallways to tell members who were working on other tasks before service.

“Our prayers have been answered,” Stuckey, also a close friend of the Carters, said. “I can’t think of a better Christmas present.”