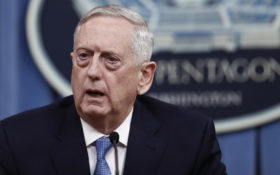 On Tuesday, a reporter who helped bring down former President Richard Nixon set off a firestorm in the White House with the release of his tell-all-book that was a largely anti-Trump and anonymously sourced.

The book, “Fear: Trump in the White House,” by Bob Woodward claimed that Secretary of Defense Jim Mattis told “close associates that the president acted like — and had the understanding of — ‘a fifth- or sixth-grader.'”

The only problem? Mattis says it’s all fiction. “Mad Dog” Mattis released a statement slamming Woodward for his “uniquely Washington brand of literature,” and said those words “were never uttered by me or in my presence.”

President Donald Trump decried the quotes and stories in the book on Twitter as “frauds, a con on the public,” adding that Mattis and chief of staff John Kelly had denied uttering everything quoted about the president in the book.

He denied accounts in the book that senior aides snatched sensitive documents off his desk to keep him from making impulsive decisions. He said in an interview with The Daily Caller, “There was nobody taking anything from me.”

Trump also denied the book’s claim that he had called Attorney General Jeff Sessions “mentally retarded” and “a dumb southerner.”

Trump insisted he “never used those terms on anyone, including Jeff,” adding that “being a southerner is a GREAT thing.”

The White House, in a statement from press secretary Sarah Huckabee Sanders, dismissed the book as “nothing more than fabricated stories, many by former disgruntled employees, told to make the president look bad.”

Woodward did not immediately respond to a request for comment.

The book quotes Kelly as having doubts about Trump’s mental faculties, declaring during one meeting, “We’re in Crazytown.” It also says he called Trump an “idiot,” an account Kelly viciously denied Tuesday.

The book says Trump’s former lawyer in the Russia probe, John Dowd, doubted the president’s ability to avoid perjuring himself should he be interviewed in special counsel Robert Mueller’s investigation into Russian election interference and potential coordination with Trump’s campaign. Dowd, who stepped down in January, resigned after the mock interview, the book claims.

“Don’t testify. It’s either that or an orange jumpsuit,” Dowd is quoted telling the president.

Dowd, in a statement Tuesday, said “no so-called ‘practice session’ or ‘re-enactment’” took place and also denied saying Trump was likely to end up in an orange jumpsuit.

According to the book, Mattis is quoted explaining to Trump why the U.S. maintains troops on the Korean Peninsula to monitor North Korea’s missile activities. “We’re doing this in order to prevent World War III,” Mattis reportedly said, according to “anonymous sources.”

Mattis slammed the claims in a statement Wednesday: “The contemptuous words about the President attributed to me in Woodward’s book were never uttered by me or in my presence.” He added, “While I generally enjoy reading fiction, this is a uniquely Washington brand of literature, and his anonymous sources do not lend credibility.”

“The idea that I would show contempt for the elected Commander-in-Chief president Donald Trump, or tolerate disrespect to the office of the President from within our Department of Defense is a product of someone’s rich imagination,” concluded Mattis.

“Mr. Woodward never discussed or verified the alleged quotes included in his book with Secretary Mattis” or anyone within the Defense Department, Manning said.