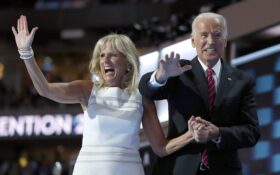 First Lady Jill Biden had something shocking to say to then-Sen. Kamala Harris approximately two years ago: “GO F*** YOURSELF!”

In the cutthroat world of Washington, D.C. politics, arguments within a political party usually happen quietly.

But that wasn’t the case after Harris accused then-Democratic presidential candidate Joe Biden of backing racist policies during a Democratic primary debate in 2019.

Harris, looking to make a jump in the polls, decided to attack Biden’s prior busing policies:

Growing up, my sister and I had to deal with the neighbor who told us her parents couldn’t play with us because she — because we were black. And I will say also that — that, in this campaign, we have also heard — and I’m going to now direct this at Vice President Biden, I do not believe you are a racist, and I agree with you when you commit yourself to the importance of finding common ground.

But I also believe, and it’s personal — and I was actually very — it was hurtful to hear you talk about the reputations of two United States senators who built their reputations and career on the segregation of race in this country. And it was not only that, but you also worked with them to oppose busing.

And, you know, there was a little girl in California who was part of the second class to integrate her public schools, and she was bused to school every day. And that little girl was me.

You can see it here —

That didn’t sit well with Jill Biden, who was reportedly furious and told supporters in a phone call later that week.

“With what he cares about, what he fights for, what he’s committed to, you get up there and call him a racist without basis?” Jill Biden reportedly responded after Harris’ attack.

She wasn’t alone in her fury towards Harris.

Joe Biden reportedly turned to then fellow candidate Pete Buttigieg — now the White House Transportation Secretary — and complained during the commercial break, “Well, that was some f***ing bull****.”

How deeply the attack actually hurt Joe Biden remains unknown. In the end, he still asked Harris to be his running mate.

But what we do know is that Jill was furious.

And she said exactly how she felt.