Insider: Jeff Sessions will be FIRED in 74 days!? - The Horn News 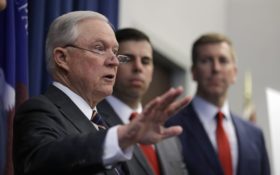 President Donald Trump escalated his feud with Attorney General Jeff Sessions on Friday, pressing him to investigate those who are probing his administration — and one insider is predicting the end of Sessions run as Attorney General right after the election.

Responding to Sessions’ declaration that he would not be influenced by politics, Trump tweeted that Sessions must “look into all of the corruption on the ‘other side,’” adding: “Come on Jeff, you can do it, the country is waiting!”

Sen. Lindsey Graham predicted on Thursday that it is “very likely” that Sessions will be fired by Trump following the 2018 midterm elections.

The president’s tweets marked the second day of a highly public spat between Trump and his attorney general.

Earlier this week, Trump accused Sessions of failing to take control of the Justice Department. Sessions responded back Thursday, saying that he and his department “will not be improperly influenced by political considerations.”

Republican members of Congress have long advised Trump that firing Sessions — especially before the midterm elections — would be deeply damaging to the party.

Graham, who in March said firing Sessions would “blow up” the Judiciary Committee, has been shifting his tone.

“I think there will come a time, sooner rather than later, where it will be time to have a new face and a fresh voice at the Department of Justice,” he told reporters on Thursday. “Clearly, Attorney General Jeff Sessions doesn’t have the confidence of the president.”

In the past year, Trump has publicly and privately vented over Sessions’ decision to recuse himself from the federal Russia-collusion investigation because he’d worked on Trump’s campaign. Trump, who blames that decision for the eventual appointment of special counsel Robert Mueller, told “Fox and Friends” host Ainsley Earhardt that Sessions “never took control of the Justice Department and it’s a sort of an incredible thing.”

“What kind of man is this?” Trump asked.

“You know the only reason I gave him the job? Because I felt loyalty, he was an original supporter,” Trump said of Sessions, an Alabama Republican who was the first senator to endorse Trump’s bid.

Sessions has made clear to associates that he has no intention of leaving his job voluntarily despite Trump’s constant criticism.

“I took control of the Department of Justice the day I was sworn in, which is why we have had unprecedented success at effectuating the President’s agenda,” he said. Sessions said that while he’s attorney general of the department “will not be improperly influenced by political considerations. I demand the highest standards, and where they are not met, I take action.”

Some critics suggest that Session should step down from his post, rather than be fired.

Do you believe Jeff Sessions needs to resign? Share your opinions below —

Do you believe Jeff Sessions needs to resign?