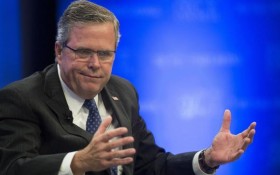 Six years after his political career came to a crashing halt, Jeb Bush is back on the hustings.

The former Florida governor, whose 2016 presidential campaign was a colossal flop, has been on a media blitz—where he’s taking swipes at Donald Trump.

Last Thursday, Jeb Bush went on CNN, where Jake Tapper asked him whether Mike Pence will run for the Republican presidential nomination in 2024.

Bush said he didn’t know Pence’s plans, but he thought the former vice president would challenge Trump for two reasons: “My guess is that there’ll be a yearning for a) a new generation of leadership in our country in 2024 and b) candidates that are focused on the future, not necessarily the grievances of the past.” (Yes, he actually said “a” and “b.”)

It’s not clear how talking about “a new generations of leadership” helps Bush, a man who last held office 15 years ago and whose family has been synonymous with the GOP since 1980.

But his words were obviously intended to take down the 45th president, who would be seeking the party’s nomination a third time, and who speaks regularly about fixing election irregularities that took place in the 2020 election.

Jeb Bush said he didn’t want to talk politics, but then he made another prediction: “Whether or not the former president (Trump)  runs or not, I have no clue. He’ll be formidable,” Bush said, “But there’ll be other candidates that will be able to make their case, for sure.”

Tapper didn’t follow up about who those “other candidates” would be…or whether Jeb Bush would be one of them.

For non-Southerners, “Bless his heart” is an insult, not a prayer. Bush had already lashed out at Trump on Twitter, asking, “What’s up with you?”

I am so confused. My dad enjoyed a good Chinese meal and enjoyed the challenge of 7 10 split. What the heck is up with you? https://t.co/LT1jET2kor

He was back at it on Monday morning, Jeb was on Fox News again, this time with Dana Perino’s “America’s Newsroom”—an alumna from his brother George W. Bush’s administration. This time, he was talking about learning loss reflected in low school test scores.

Then again, Jeb had been a major advocate of the Common Core curriculum that had parents scratching their heads before the pandemic.

In his appearances, Bush seemed harder on Trump than he was on Democrats whose lockdowns destroyed educational scores for a generation.

“Mistakes may have been made” closing down schools for a year or more, Jeb told Tapper, because it was “a really difficult time.”

He might have said the same thing about his 2016 presidential race.

He blew more than $150 million in donors’ money on his 2016 presidential campaign. After Trump branded him “low-energy,” Jeb came in sixth place in the Iowa caucuses—where he spent $3,000 for every vote. All said, he won three delegates—spending an eyewatering $53 million for each one.

After the campaign, we found out that he didn’t just spend American money: Jeb’s Right to Rise super PAC accepted more than $1.3 million in illegal campaign contributions from China. The Federal Election Commission slapped Jeb’s PACE with a $390,000 fine in 2019.

Two years after bowing out, Jeb Bush said he wasn’t sure if he’d ever give the voters the chance to vote for him again. “I don’t know. I love policy. I love my country. But this political environment right now, I’m not suited for,” he said—blaming voters for his lack of popularity. “To be honest with you. I’m a fish out of water. I can’t imagine having to attack someone to make yourself look strong.”

Then he disappeared for a few years…but now, he’s back with a wall-to-wall media push that has tongues wagging.

Ironically, if he decides to run for president as a Republican—or an independent—he could have one major advantage over other candidates: All the mockery heaped on him in the last eight years.

The Los Angeles Times reported that a younger generation sees Jeb as an unassuming, friendly guy, because they know him only as the man from memes, where he’s begging audiences, “Please clap.”

But, the Times admits, even the young people they talked to are far more likely to vote for Bernie Sanders—not exactly “a new generation of leadership”—than Jeb.

A left-winger who tweets under the handle “@jeb_bush_2020” said he sees the least successful Bush as just another “tragicomic, pathetic guy.”

Another left-winger said the “banal, milquetoast guy out of that context is just incredibly funny.”

But the fact that Jeb Bush seems hung up on a rematch with the candidate who destroyed the Bush family dynasty and buried him alive beneath wave of populist votes six years ago is too sad to laugh at, or clap for.