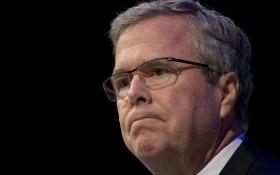 Former Florida Gov. Jeb Bush has been struggling in the polls, despite spending circles around his rivals for the Republican presidential nomination.

Yet for all the money his campaign has invested — $26 million on television ads alone — his donors have yet to see a substantial return.

And they’re getting nervous.

Having fallen from summer front-runner to autumn afterthought, the former Florida governor made deep spending cuts to his campaign operation in October. But he and his backers plowed ahead with a television blitz three times the size of anyone else’s, while putting a new strategic focus on New Hampshire.

As December begins, though, Bush remains mired in single digits — including in New Hampshire — in a race that continues to be dominated by political novices, most notably billionaire real estate mogul Donald Trump.

Top Bush donors will head to Miami on Saturday for a campaign update.

But those same backers are also starting to acknowledge that time is growing short, with the leadoff Iowa caucuses now just two months away. And it remains to be seen how long they’ll continue to pour money into what may be a sinking ship.

“We’ve got to do better than expected in those first three states” of Iowa, New Hampshire and South Carolina, said Barry Wynn, one of Bush’s biggest South Carolina supporters and a member of his national finance team.

Said Craig Duchossois, a devoted financial backer from Chicago, “I continue to be concerned.”

The pro-Bush super PAC, called Right to Rise, has spent about $26 million on TV and radio commercials in the past 11 weeks, according to Kantar Media’s CMAG advertising tracker. That’s about a quarter of the record-setting $103 million it raised in the first six months of the year.

When Bush gathered his top donors in Houston in October at an event that featured former Presidents George H.W. Bush and George W. Bush, many suggested that the candidate’s poll numbers would improve by the end of November — once those ads had time to penetrate.

That hasn’t happened. At the start of the ad campaign in mid-September, an ABC News/Washington Post poll found that about 8 percent of Republican and Republican-leaning registered voters nationally said they supported Bush. Two months later, and despite thousands of biographical ads that touted Bush as a proven leader, his numbers in that same poll were about the same: 6 percent.

It’s the same story in New Hampshire, a state Bush has visited nearly weekly since November. He was the first choice of 9 percent of likely Republican primary voters in a poll conducted for WBUR in mid-September, and was at about 7 percent by the middle of November.

Duchossois said Tuesday, “The next month is absolutely critical.”