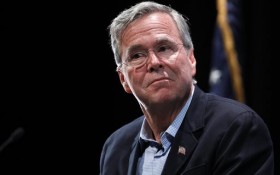 Republican presidential candidate Jeb Bush has gone from king to pauper. The one-time GOP front-runner has begun desperately slashing campaign spending, including an across-the-board pay cut for staff, as the former governor seeks to salvage his bid for the GOP nomination.

Despite the significant troubles for a campaign, there are no immediate signs Bush is ready to withdraw from the race yet.

Still, the former Florida governor — a son and brother of former presidents — has been under pressure from supporters to revamp his campaign as the early voting contests draw closer. The first-to-vote Iowa caucuses take place 100 days from Friday.

Despite financial and organizational advantages, Bush has struggled to break out of a crowded Republican field so far dominated by unorthodox candidates, including billionaire Donald Trump and retired neurosurgeon Ben Carson.

The changes predominantly impact staff at Bush’s Miami headquarters. Only about 25 percent of campaign staff will remain in Florida. Another one-fourth of the staff was already in early voting states and the remaining Bush aides will either be offered jobs there or other posts at reduced salaries.

Campaign officials said the changes would allow Bush to bolster his resources in early voting states, particularly New Hampshire. Officials also suggested that by shifting staff out of Miami, Bush can make more and longer trips to New Hampshire, as well as Iowa, South Carolina and Nevada.

It’s unknown how many of Bush’s Miami staff will accept positions elsewhere.

Bush officials acknowledged that the changes reflect a campaign landscape that looks far different than what they originally expected. Trump’s unexpected rise has pulled attention away from other candidates and revealed deep voter frustration with Washington and experienced politicians.

Bush’s campaign has urged supporters to be patient, pointing to its large organization and heavily funded super PAC as signs their operation is built to last through a long campaign. The campaign and super PAC have been spending heavily on television advertisements in early voting states, but so far there is little sign that his standing in the race is significantly improving.