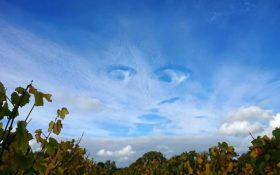 A woman in South East England snagged a photo of a cloud formation in the sky that she believes was a face looking down at her.

SWNS reports that Nicole Nicholas was working in her local vineyard when she saw what resembled a perfect face in the sky — and the photo has many wondering if it could be an angel.

“We were picking our Chardonnay grapes today and we all saw this amazing face looking down at us,” she said.

The clouds had formed what appeared to be two large eye shapes with ‘pupils’ that were looking straight down on Sandhurst Vineyard in Kent.

“The crop is huge so I presume he was shocked at how much we were picking,” Nicholas joked.

Recently, there has been several other cloud formations that have people questioning if they are witnessing an angel in the sky.

A Michigan man was blown away when he saw an image of what appeared to be a real angel above his home in May. A Texas man snapped a photo of a cloud formation in July that he said resembled an angel.

In Alabama, a woman captured a video of what appears to be a man walking across the clouds — and many believed it was God.