Man captures image of REAL angel in the sky!? - The Horn News 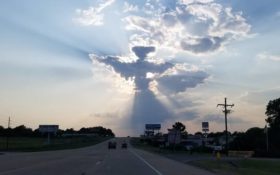 A Texas man snagged a photo on Monday of a cloud in the formation of what he believes resembles an angel.

Danny Ferraro snapped the photo and posted it to Facebook on Monday evening — and the photo quickly gained nearly 400 likes and over 100 comments.

The photo that has been shared over 950 times was captioned by Ferraro, “This was the sunset as we were driving down Hwy 105. How awesome is that!”

TEXAS ANGELThis was the sunset as we were driving down Hwy 105. How awesome is that!

Ferraro told ABC Action News that he captured the photo while driving to a situation he was not looking forward to.

He explained that the appearance of the angel made him believe that thing would be “OK.”

One Facebook user commented on the photo saying, “Stunning…gave me chills..guardians around us.”