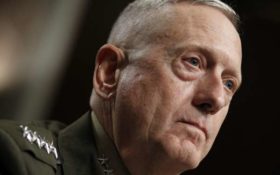 Retired Gen. James “Mad Dog” Mattis is poised to take over as secretary of defense — and it has President Barack Obama terrified.

For years, the Obama administration worried about Mattis because of his no-nonsense attitude, and his uncompromising beliefs.

And according to The Associated Press, the Obama administration fears Mattis’ leadership will greatly help President-elect Donald Trump undo the controversial nuclear deal with Iran.

Mattis views Tehran as a menace in the Middle East, and would work for a president, Donald Trump, who has pledged to toughen U.S. policy toward Iran. That could have broad implications as the incoming administration weighs modifying the 2015 Iran nuclear deal and reconfiguring American posture in the Middle East after numerous complaints from U.S. allies that Obama yielded too much ground to Tehran.

And it has Obama terrified his work will be undone.

Mattis will become the first career military officer in charge of the Pentagon since the 1950s, and said Thursday he would have no problem embracing the tradition of civilian control of the military.

In testimony prepared for his Senate Armed Services Committee hearing, Mattis said he understands his role as the Defense Department’s civilian leader would be different “in essence and in substance” from his four decades in uniform.

“The esprit-de-corps of our military, its can-do spirit, and its obedience to civilian leadership reduces the inclination and power of the military to criticize or oppose the policy it is ultimately ordered to implement,” Mattis said. He called civilian control “a fundamental tenet of the American military tradition.”

Mattis, 66, retired in 2013 after serving as commander of U.S. Central Command in charge of all U.S. forces in the Middle East.

“History is clear: Nations with strong allies thrive and those without them wither,” Mattis said.

Before Mattis can join the Cabinet, Congress must approve a one-time exception to a law requiring a military officer to be out of uniform for at least seven years before leading the Pentagon. Even some of Trump’s strongest critics say Mattis merits the exception.

Eliot A. Cohen, a senior State Department counselor in President George W. Bush’s administration who has publicly criticized the incoming Trump team, said at a Senate hearing this week that Mattis “would be a stabilizing and moderating force” and is a great addition to the Trump administration.

Trump has selected two other recently retired generals for top jobs in his administration.

Michael Flynn, who left the Army as a lieutenant general in 2014 after a tumultuous tenure as the Defense Intelligence Agency’s director, is Trump’s national security adviser. Marine Gen. John Kelly, who retired in 2016, was chosen to head the Department of Homeland Security.

Mattis could attract top-notch talent to the Pentagon, said Richard Fontaine, the Center for a New American Security’s president.

“He has a reputation as a leader of exceptional integrity who inspires his subordinates and speaks truth to power,” Fontaine said in an email.

A contrast to Obama, indeed.