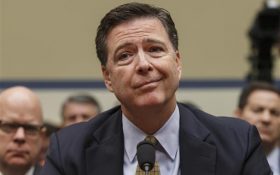 Former FBI Director James Comey sat down for an interview with CNN’s Jake Tapper on Thursday — and he made a shocking confession that the mainstream media doesn’t want America to hear.

In the past week, Comey has claimed President Donald Trump is unfit for the office. He called his presidency a forest fire. But when asked if former Secretary of State Hillary Clinton would be a better fit, he had had no answer.

Tapper asked Comey, “You’ve leveled some very tough charges about him. You call him morally unfit; you call his presidency a forest fire; you say he’s violating the rule of law. Do you think the nation would be better off if Hillary Clinton had won?”

“I can’t answer that. That’s something that – that hypothetical [is] too hard for me to go back in time and try and answer,” Comey responded.

You can watch the interview here —

Comey has painted a picture of Trump being an unethical bully — so if he hates the president that much, why is the question so hard to answer?

Critics believe it is because Comey is using his book about Trump to ring in the cash.

“You paint a pretty dire picture of President Trump. It’s hard to imagine how you don’t think the nation would be better off if Hillary Clinton had won,” Tapper noted.

And Comey’s response let many with their jaws to the floor.

“I don’t think about it in those terms, Jake. I think we have the current president, who was, in my view, legitimately elected, is serving as president – the question is: is he adhering to our values?” he explained.

For over a year and a half, the media has continued to play the narrative that Trump was not elected legitimately, and here we have an outspoken anti-Trumper confirming that he was indeed voted into the presidency lawfully.

Tapper went on to ask Comey, “It’s interesting that you won’t go as far to say … the nation would be better off if Hillary were president because you have called for the nation to respond to the challenge of Trump, in your view, by voting – presumably by voting against what he represents. Is that not a fair interpretation?”

” I actually think of it – maybe it’s the same thing, but I think of it in terms of voting for something else, which is the core values of this country, which are more important than any policy disputes. I don’t care whether people find that in a Republican or a Democrat, or neither, it’s important that our leaders reflect those values,” Comey responded.

The polls do not lie, Comey. Trump’s values and standards are mirrored by most Americans.

As Comey admitted, Trump was elected legitimately and that is because his presidency reflects the values that many Americans uphold. He is the president of the people — and even Hillary cannot change that.