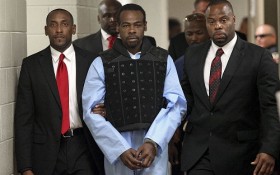 It may be one of the most daring jailbreaks in recent memory.

Authorities in western Mississippi launched a massive search Wednesday for Rafael McCloud, 33, a capital murder suspect who escaped from a county jail.

Warren County Sheriff Martin Pace says McCloud broke out by taking a jail employee hostage and forcing the hostage to give McCloud his clothes. McCloud also took a radio and keys and escaped, Pace said, but both items were recovered later on the grounds of the jail.

McCloud is charged with capital murder, sexual battery, rape, arson, home invasion, being a felon in possession of a firearm and grand larceny auto theft, records show. He is considered armed and dangerous.

McCloud is accused in the kidnapping and death of Sharon Wilson, 69, whose body was found in July behind the abandoned Kuhn Memorial State Hospital in Vicksburg, authorities said. Wilson had been hit in the head and beaten, investigators said

Vicksburg Police Chief Walter Armstrong said between 25 and 30 officers are involved in the search, along with multiple units from the sheriff’s department. The search is centered about ½ mile northeast of the jail, which is in Vicksburg.

“The search is concentration along Martin Luther King Boulevard where he previously lived,” Armstrong said.

McCloud is described as 5 feet, 8 inches tall and weighing 170 pounds. He was last seen wearing green pants and a black jacket.