Jail? This footage of John Kerry stunned everyone - The Horn News 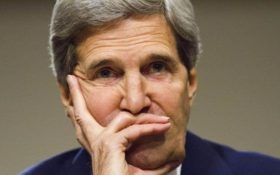 Former Secretary of State John Kerry could wake up on Friday in handcuffs — unless Democrats want to admit that President Donald Trump’s phone call with the Ukrainian president was, as the president puts it, “perfect.”

Kerry was caught in a 2004 scandal much like Trump’s, but no one was calling for his ouster then.

In fact, no one — not a single Democrat or Republican — cared in the least bit.

Trump talking politics in a conversation with a foreign leader isn’t an impeachable offense because it’s not a “high crime and misdemeanor.”

But if it is, like Democrats claim, then it’s time to also prosecute half of former President Barack Obama’s administration — including Kerry.

On his cable news show on Tuesday, Fox News’ Tucker Carlson revealed a bombshell that should have Kerry sweating.

“Last night we showed you a phone transcript where Bill Clinton, who was the president, asked Tony Blair, who was the prime minister of Great Britain, for a political boost before the 2000 election,” Carlson said. (You can see that if you click here)

“We weren’t singling out Bill Clinton,” he explained. “This is just very, very common.”

“John Kerry has been talking to anyone about the president’s shocking behavior with Ukraine,” Carlson continued, showing a clip of Kerry talking about the “absolute shock” he felt after reading the controversial Trump phone call transcript.

“That is a fundamental and profound abuse of power. There’s no other way to put it,” Kerry said in the clip, taken from a recent appearance on MSNBC.

Then, the Fox News star dropped a bombshell.

“During the 2004 election, which he lost, John Kerry openly bragged about soliciting support from foreign leaders against his opponent that year, the incumbent President George W. Bush,” Carlson explained.

He then quoted Kerry directly.

“I’ve met foreign leaders who can’t go out and say this publicly, but boy they look at you and say, ‘You’ve got to win this, you’ve got to beat this guy, we need a new policy,'” Kerry said in 2004.

And it gets better.

When pressed, Kerry declined to name the foreign leaders or the policies he’d discussed altering on their behalf.

According to Carlson, Kerry said it was his right to keep his conversations with foreign leaders confidential.