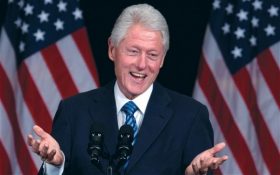 It’s the Clinton phone call transcript that Democrats and their media allies don’t want American voters to see — but it was hiding out in public.

In fact, Fox News’ Tucker Carlson said he didn’t even have to dig deep at all to find a 2000 phone call between former President Bill Clinton and a foreign leader, where Clinton is clearly asking for help in the upcoming 2000 presidential election.

“You’ve heard endlessly on cable news that it is unprecedented the president would seek political gain from a conversation with a foreign leader,” Carlson explained.

“Well, turns out, it has happened before. Back in 2000, President Bill Clinton had a conversation with Tony Blair of the U.K. and asked him to intercede in a dispute between British Airways and two [American] carriers,” Carlson explained.

It wasn’t subtle, either. Clinton was very blunt about his desire to have Blair interfere on behalf of the Democratic Party.

“The president, at the time, was much more direct than President Trump was in his conversation,” Carlson said.

“In a political season, it would be big over here to get this open sore resolved,” Clinton told Blair, according to the transcript of a Feb. 8, 2000 phone call. “If you could have somebody take a look at it.”

Blair responded that he would gladly help Clinton.

Later in that call, Clinton would praise Russian dictator Vladimir Putin’s leadership. He told Blair the Russian leader had “enormous potential” and was “very smart and very thoughtful.”

Unsurprisingly, there was no whistleblower in 2000.

There was no media outrage.

“Now, is this a big deal? Not really,” Carlson said. “Is it nakedly political? Is it an attempt to use a foreign country to influence the outcome of an election in a presidential year? Yes, it is, obviously.”

In fact, the incident was so mundane that it wasn’t even hidden.

“Incidentally, it didn’t take long for us to find that, we only had to dig through old Clinton transcripts for about 15 minutes,” Carlson said. “There are probably a lot more examples, and if we find them we will bring them to you.”

There was no cover-up.

There was no secret whistleblower bombshell or impeachment inquiry.

And the media certainly didn’t care.