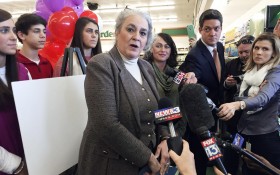 Wednesday’s Powerball jackpot of $1.6 billion, the biggest lottery prize ever, saw Americans everywhere swarming convenience stores for a chance to be the world’s next billionaire. Of the millions of tickets sold, three matched the numbers drawn Wednesday night, 4-8-19-27-34 and Powerball 10.

Now, winners are starting to come forward to claim their prizes.

A Tennessee family announced on the TODAY show Friday morning that they had one of the jackpot tickets. John and Lisa Robinson claimed they bought four tickets from Naifeh’s Food Mart Wednesday night, located one block from their home. After taxes, the prize is $327.8 million if they choose the cash all at once option.

No one has come forward claiming they have the winning ticket that was purchased in Chino Hills, California, but the 7-11 store where it was purchased has been celebrating. Customers swarmed the store to congratulate the owner, a newly made millionaire himself. Store owner Balbir Atwal received a check for $1 million, the business’ take for selling the winning ticket.

In California, winner’s names are public record, which could be the reason behind why the winners have yet to come forward. Lottery spokesman Russ Lopez said, “We’re waiting for the big jackpot winner. We could be waiting a long time.” It is no secret that the money will change the lives and personal relationships of the winners.

To get an idea about the California winner, The Horn News took a look at the demographics in the rural California suburb of Chino Hills. According to the US Census Bureau, the estimated population is 77,005 and the median household income from 2009-2013 was $96,497.

Seems like the Chino Hills jackpot winner is no stranger to money.

In Melbourne Beach, Florida, the grocery chain Publix sold the winning ticket, but the lucky person also has yet to come forward. According to Florida lottery rules, the retailer will receive $100,000 for selling the jackpot-winning ticket.

Of course, jackpot prizes weren’t the only winning combinations.

In Lake Mary, Florida, 19-year-old Frederick Walker – who had never purchased a lottery ticket before – matched all of the numbers except for the Powerball. Walker’s prize for getting so close? A $2 million prize. According to Florida lottery officials, there were eleven $1 million tickets sold in addition to Walker’s single $2 million ticket.

According to lottery officials, 85.8 percent of possible number combinations had been selected by Wednesday afternoon, leaving no surprise that there were a number of winners.