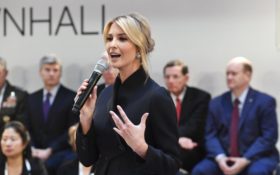 CNN’s Jim Acosta is no stranger to the anger of President Donald Trump. Trump labeled him “fake news” back in 2016 — and the two have sparred repeatedly in recent years.

But at Davos, the World Economic Forum in Switzerland, Acosta got a rude awakening after coming face to face with Ivanka Trump.

And Ivanka shut down his attempt at an interview.

The First Daughter flat ignored Acosta and walked right past the CNN star when he attempted to shove the microphone in her face.

“Any comment on your father’s impeachment trial?” he asked.

A number of liberal critics had taken aim at Mrs. Trump in an attempt to discredit her rising political status, but it’s CNN’s Acosta and his impeachment-hungry agenda who should be scrutinized.

Acosta just can’t contain himself — but Ivanka treated him with the little dignity he deserved.

You can watch the embarrassing video below:

The tide is slowly shifting against the liberal media, and fed up conservatives are no longer playing by liberal journalists’ rules.

David Harris Jr, a conservative author and pundit, re-posted the video of the recent incident, claiming that McSally only said what Americans felt.

What’s your acronym for cnn? pic.twitter.com/c3LGVA8AMR

He could be onto something.