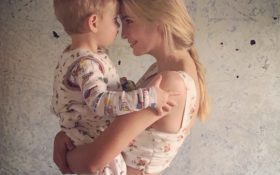 But leftists took no time to respond with nasty comments aimed at Ivanka, calling her “self-absorbed” and “a despicable pile of trash.”

Her crime? Even being a good mother is offensive to liberals!

Liberals were criticizing President Donald Trump’s misunderstood immigration policy that places illegal minors with sponsors if their parents are detained at the US-Mexico border and deported. This policy has nothing to do with Ivanka cuddling her child… but insane liberals attacked her anyway.

Critics, such as MSNBC correspondent Joy Reid and author Paola Mendoza, show their ignorance of the policy that is intended to deter families from entering the country illegally.

You’d almost never know her father’s administration, to which she is an adviser, was brutally separating migrant children from their asylum-seeking parents and lost track of 1,500 of them… https://t.co/sMQ2GWA2zY

.@IvankaTrump, you are lucky to hold your son while 1500 mothers cannot, because your father ripped their children away under a vicious policy that he created.

There were a few educated users that came to Ivanka’s defense, calling out the mainstream media machine for focusing on this photo instead of the real change that Trump and his administration have been making, like his recent work with Veterans Affairs.

We live in a country where the MSM attacks a woman for hugging her child.

What a bizarre world. pic.twitter.com/JfB51TAY4i

It is so stupid for CNN to give a platform to people who want to manufacture a controversy over Ivanka Trump posting a picture with her son.

CNN might as well just write Trump a check for his 2020 campaign with this kind of insanity. https://t.co/j8H71cJqSk

But don’t worry – Ivanka isn’t a snowflake; she doesn’t respond to liberal hate with more nasty remarks. She gracefully responded to critics by posting a tweet encouraging people to simply ignore the haters.

3:3 Focus on what is before you, on what you can control and ignore the trolls!
Have a great week!