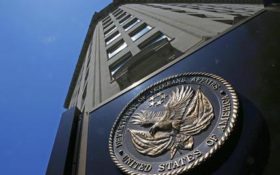 President Donald Trump delivered a victory by expanding private care for veterans as an alternative to the troubled Veterans Affairs health system.

The sweeping measure would allow veterans to see private doctors when they do not receive the treatment they expected, with the approval of a Department of Veterans Affairs health provider. Veterans could access private care when they have endured lengthy wait times or VA medical centers do not offer the services they need.

The White House said Trump applauded passage of legislation that would transform VA “into a high-performing and integrated health care system for the 21st century and provide veterans with more choice in their health care options, whether from VA doctors or from the community.”

The VA secretary will have wide leeway in implementing the legislation, which leaves it up to VA to determine what is “quality” care. Trump said last week he will nominate acting VA secretary Robert Wilkie to permanently lead the government’s second largest department serving 9 million veterans. Democrats say they intend to question Wilkie on whether he plans to “privatize” or degrade the VA health system, an issue that former VA Secretary David Shulkin says led to his firing in March.

Sen. Johnny Isakson, the Republican chairman of the Senate Veterans Affairs Committee, lauded the bill as a big step toward providing veterans with “more choice and fewer barriers to care.”

Trump has made clear he will sign the bill if it reaches his desk before Memorial Day. The House passed it on a 347-70 vote last week.

The Senate supported the bill that would create a presidentially-appointed commission to review the closure of underperforming VA facilities. House Democrats had sought restrictions on the commission but were rebuffed by House Republicans and the White House.

The $51 billion bill provides for a newly combined “community care” program that includes Choice and other VA programs of outside care. It could face escalating costs due to growing demand from veterans seeking the convenience of seeing private physicians. Some House Democrats warn the VA won’t be able to handle a growing price tag, putting the VA at risk of unexpected budget shortfalls next year.

The measure builds on legislation passed in 2014 in response to a wait-time scandal at the Phoenix VA medical center, where some veterans died while waiting months for appointments.

It aims to steer more patients to the private sector to relieve pressure at VA hospitals, thus improving veterans care at VA facilities and with private providers alike. Patients could also access private walk-in clinics, such as MinuteClinics, to treat minor illnesses or injury if they used VA health care in the last two years.

A broad array of veterans’ groups supported the bill. The American Legion, the nation’s largest veterans group, says the plan will “strengthen veterans’ health care for future generations while ensuring that veterans’ caregivers of all generations get the support they deserve.”

The conservative Concerned Veterans for America, a long-time advocate of expanding private care for veterans, called the measure a “very big deal.” Still, executive director Dan Caldwell stresses the “top priority for the VA secretary is ensuring it will be implemented properly.”