Film flops! Here are the worst movies of 2015 - The Horn News 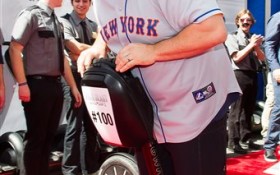 “Fifty Shades of Grey” is all tied up with “Pixels,” ”Jupiter Ascending” and “Paul Blart Mall Cop 2” for the most nominations at this year’s Golden Raspberry Awards celebrating the worst in cinema.

The films led the Razzies lineup Wednesday with six nods each, including worst picture and worst actor for Jamie Dornan in the sexy thriller “Fifty Shades of Grey,” Kevin James in the comedy sequel “Paul Blart Mall Cop 2,” Channing Tatum in the sci-fi film “Jupiter Ascending” and Adam Sandler in the video game mash-up “Pixels” and fantasy-comedy “The Cobbler.”

The other worst picture nominee is the superhero flop “Fantastic Four,” which is also up for worst remake, screen combo, director for Josh Trank and screenplay for Simon Kinberg, Jeremy Slater and Trank.

The announcement of the Razzies, which launched in 1980 as a spoof of Hollywood’s awards season, comes ahead of Thursday’s Oscar nominations.

The “winners” for the 36th annual Razzies will be announced Feb. 27, the night before the 88th annual Academy Awards. They will be selected by 900 voting members from 47 states in the United States and 21 foreign countries.

While far less star-studded than other award shows, past recipients such as Halle Berry and Sandra Bullock, have actually shown up in person to claim their gold spray-painted prizes.