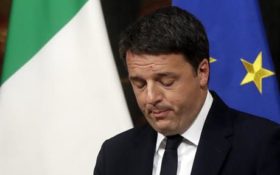 Renzi announced he would quit following Sunday’s referendum vote, in which 60 percent of voters rejected his proposals and signaled they wanted a change in political direction. Renzi, who had boldly staked his political future on winning the referendum, was expected to hand in his resignation to President Sergio Mattarella later Monday.

The unexpectedly large margin of defeat with a robust voter turnout of 68.5 percent appeared to rule out any chance Renzi would be offered another shot at forming a government, although analysts expect Mattarella to ask Renzi to stay on long enough to pass the new budget, with a target date of Dec. 23.

The vote energized the anti-establishment 5-Star Movement and the anti-immigrant Northern League, whose leader has allied himself with far-right figures in Europe including France’s Marine Pen and Norbert Hofer in Austria, who lost a presidential runoff in Austria on Sunday.

While the opposition parties were joined in antipathy for Renzi’s policies and reform course, they share little else in common, and have already begun vying to position themselves for new elections, although the timing of any vote remained unclear. Analysts expect that Mattarella would try to appoint a transition government to draft a new election law, with speculation centering on either Renzi’s finance minister, Pier Carlo Padoan, or the president of the Senate, Pietro Grasso.

But that course is already facing opposition.

The current election law, which Renzi wanted to reform, would hand a huge bonus of seats to the lower house while maintaining a proportional system for the upper house, raising the potential for parliamentary gridlock.

With much wrangling ahead, the risk facing Italy is “a prolonged muddle-through period, the emergence of an ineffective, patched-up coalition government in the post-election phase and continuously poor economic performance,” said Wolfango Piccoli, a political analyst at Teneo Intelligence consultancy.

The Milan Stock Exchange opened down 2 percent, with many bank shares suspended due to excessive volatility, before returning to positive territory.

Investors had been anticipating Renzi’s defeat for several days, and had sold off Italian stocks and bonds. Monday’s sanguine market reaction can also be attributed to the fact that Italy’s markets indirectly enjoy a big backstop from the European Central Bank.

The central bank for the 19-country eurozone is buying 80 billion euros ($85 billion) every month in bonds, including government debt, across the currency bloc. It is expected on Thursday to decide to extend that program beyond its current end date of March. The bond purchases aim to boost growth and inflation but also effectively help keep low government borrowing rates. That is crucial for Italy, which has a massive public debt load of 130 percent of GDP.

Italy’s 10-year bond yield was down 0.03 percentage points at 2.01 percent on Monday. That’s up from 1.65 percent last month but is still very low for a highly indebted country like Italy. It’s also far short of the 7 percent rate that in 2012 had created fears that the country might default and fall out of the euro.

Still, the result cast doubts on the ability of Italy’s third-largest lender and the worst performer in last summer’s EU stress test, Monte Paschi di Siena, to execute a rescue plan that includes a 5 billion euro market recapitalization, amid reports of advisers meeting to discuss the vote’s impact. Italy’s biggest bank, Unicredit, also is to present to analysts its new business plan next week in London.

Renzi swept into power 2½ years ago on a pledge to dismantle the system, claiming the moniker of demolisher, but his brash ways divided his own party and his confidence was widely perceived as arrogance, even in other European capitals and especially in Brussels, where he had grown increasingly bold in pressing for flexibility on the budget.

“I lost and the post that gets eliminated is mine,” Renzi said early Monday about an hour after the polls closed. “The government’s experience is over.”