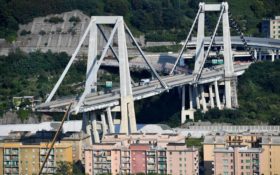 The board of the private company that controls the bridge that collapsed in Genoa approved on Aug. 21 an initial 500 million euros ($576 million) in funding to help victims and finance a new steel bridge that it says can be ready in about eight months.

Autostrade per l’Italia’s board said after an extraordinary meeting one week after the Morandi Bridge tragedy that killed 43 that it would meet at a later date to respond to government moves to privatize the more than 3,000 kilometers (1,860 miles) of toll highway that it runs under a concession.

The board said it approved an initial list of self-financed initiatives it plans following the bridge collapse. They include rebuilding the bridge “in steel according to the most modern technologies,” paying for new roadways to handle traffic in the meantime, as well as establishing funds to help the families of the victims and those who have been displaced because of concerns about the stability of the remaining structure.

Italian Premier Giuseppe Conte told the Milan daily Corriere della Sera that the half a million euros being offered by the company was insufficient.

“The sum allocated is modest compared to their profits,” Conte said. “They could quadruple or quintuple that.”

The government has taken a hard-line with Autostrade and its controlling company, Atlantia, opening procedures to retake control of the roadways alleging poor maintenance was behind the collapse. Autostrade is by far the largest of the private companies operating highways under agreements with the government that allow them to collect tolls in exchange for maintenance and upkeep. Atlantia, which is controlled by the Benetton family, lost a quarter of its stock market value in trading last week after the tragedy.

Prosecutors are investigating the collapse for possible lapses in maintenance or design flaws, but have not identified a target.