'It worked': Top Dem senator returns to Congress after stroke - The Horn News 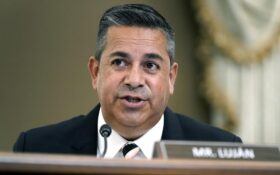 Sen. Ben Ray Luján, D-N.M., returned to Congress on Thursday for the first time since his stroke, which kept him away from Washington for weeks and temporarily weakened Democrat’s hold on power in the equally divided Senate.

Luján received a standing ovation as he entered a morning hearing of the Senate Commerce, Science and Transportation Committee. Teary-eyed, he thanked colleagues for their support and told them: “It’s an absolute honor to be back.”

“Every one of you that sent me notes, that sent videos, and all the prayers — it worked,” Luján said.

Luján, 49, began experiencing dizziness and fatigue on Jan. 27 and checked himself into a hospital in Santa Fe, New Mexico, his office said. He was diagnosed as having suffered a stroke in the cerebellum, and he had surgery to ease swelling in his brain.

His sudden absence had put new strain on Democrats’ fragile 50-50 majority in the Senate, leaving them without full day-to-day control of the chamber and putting President Joe Biden’s legislative agenda and Supreme Court nomination in doubt. But Luján, in a video message in February. vowed to return after a few weeks of recovery at inpatient rehabilitation facility.

Democrats feared a repeat of Obama’s first term, when the death of Democratic Sen. Ted Kennedy slowed down their efforts to pass the Affordable Care Act.

However, Luján’s staff tweeted in February that he was expected to make a full recovery. Now he’s back.

In a 50-50 Senate, Luján’s vote may prove critical if Democrats have to confirm Supreme Court nominee Kentanji Brown Jackson without the help of Republicans. His return could also help jump-start work on other legislation and nominations that Republicans oppose.

Senators of both parties were pulling for his recovery.

“Senator Luján, so good to see you,” Sen. Maria Cantwell, D-Wash., said at the hearing. “We love you Ben Ray and we’re glad you’re with us here today.”

“Gosh, just the nicest guy in the world,” Sen. Kevin Cramer, R-N.D, told The New York Times last month. “My hope is that we all love each other enough to just slow down, do work that we can get done that won’t be affected by his being gone and get him the hell back here when it’s safe.”

Great to be back at work! pic.twitter.com/nxPAMrEPP9

Thank you from the bottom of my heart. The outpouring of support from New Mexicans and folks all around the country gives me strength every day. Excited to get back to work. pic.twitter.com/qRH2JjLTpp

Luján is “as a quiet but well-known lawmaker on Capitol Hill,” the Associated Press reported.

He won his first Senate election in 2020, and he served in the House before that. In 2018, he became chair of the Democratic Congressional Campaign Committee (DCCC)  and helped lead the House Democrats to their current majority majority with a record-breaking class of freshmen recruits.

After his success during the 2018 election, Luján served as assistant speaker under House Speaker Nancy Pelosi.

Flashback: Biden agenda at risk as Sen. Lujan is to be out at least 4 weeks