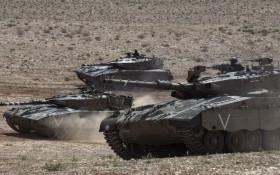 The Israelis have had enough. Israel’s Prime Minister Benjamin Netanyahu on Tuesday said he would take a series of “aggressive steps” to halt a wave of violence in Israeli cities after two attacks in Jerusalem left three Israelis dead.

The attacks in Jerusalem, including a deadly shooting and knifing spree on a bus and a violent hacking attack caught on video, escalated the month-long unrest and raised the pressure on Netanyahu to take action.

“Today we will decide on a series of additional aggressive steps in our war against terrorists and inciters,” Netanyahu said in a speech to parliament. “We will use, and not hesitate to use, all means at our disposal to restore calm.”

Netanyahu left a meeting of top security officials to deliver the speech, and quickly returned. The deliberations continued into the evening.

Channel 2 TV said measures under consideration include a deployment of Israeli soldiers in the streets of Jerusalem to assist police, surrounding Palestinian neighborhoods in the eastern part of the city with troops, stepping up demolitions of attackers’ homes, and stripping the families of attackers of their residence rights. No decisions were immediately made.

The violence erupted last month over the Jewish New Year, fueled by rumors that Israel was plotting to take over Jerusalem’s most sensitive holy site. While Israel says the rumors are unfounded, clashes have quickly spread across Israel and into the West Bank and Gaza Strip.

Eight Israelis have died in a string of stabbings, shootings and the stoning of a car. In new bloodshed, a 27-year-old Palestinian man was shot dead in a protest in the West Bank town of Bethlehem, killed while hurling a firebomb at a car.

The attacks have caused a sense of panic across Israel and raised fears that the region is on the cusp of a new round of heavy violence.

In Tuesday’s violence, a pair of Palestinian men boarded a bus and began shooting and stabbing passengers, while another assailant rammed a car into a bus stop, then got out of his vehicle and began hacking bystanders with a long knife.

The near-simultaneous attacks, along with two stabbings in the central Israeli city of Raanana, marked the most serious outbreak of violence since the current round of tensions erupted.

In the bus attack, police said a 60-year-old man was killed, and a second person who was wounded later died. One of the attackers was shot dead and the second attacker was subdued by a crowd.

Israeli police released footage showing the second attack, in which the Palestinian man rammed his car into pedestrians, then got out and hacked at them with a machete-like weapon. One person was killed, and the attacker was shot. Police said the attacker, who worked for Israel’s largest telecommunications group Bezeq and used his company car in the attack, later died of his wounds.

Netanyahu has repeatedly accused Palestinian and Islamic leaders of incitement and spreading lies. “I tell the Palestinian Authority, do not turn murderers into heroes,” he said.

Palestinian President Mahmoud Abbas has spoken out against violence, but he is deeply unpopular with his public due to the failure of peace talks and lack of hope for finding a diplomatic solution to the conflict. He also cannot be seen as abandoning what the Palestinians view as their defense of the Al-Aqsa Mosque, the third-holiest site in Islam.