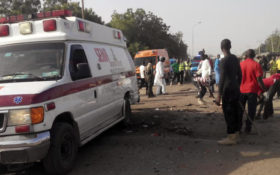 Troops shot and killed a man with explosives boldly showing strapped to his torso Sunday, as he tried to enter a refugee camp in northeastern Maiduguri city where another suicide bomber killed five people a day earlier.

The Sunday morning bombing is the fifth explosion in three weeks in Maiduguri, the birthplace of the Boko Haram Islamic extremist group blamed for the bombings. Maiduguri is also the headquarters of the military campaign to halt the insurgency.

The recent bombings have created a new wave of fear at Bakassi camp, which houses more than 16,000 people terrorized by Boko Haram into fleeing their homes.

“Why are they not ready for us to enjoy peace?” asked resident Usman Ado.

Another, Abubakar Gajibo, said he saw the bomber “clearly displaying the strapped explosives on his body.”

Residents alerted soldiers who tried to persuade the man to surrender. But when he started running toward the camp gate, they shot him. One explosive blew up immediately and a second was safely detonated, Gajibo said. The military said there was no blast and soldiers had to detonate the explosives.

On Saturday, a female suicide bomber blew herself up at the camp entrance, killing five men and injuring 11 women. A second blast 30 minutes later came from a tricycle taxi driven by a suicide bomber carrying two passengers.

A bomb blast on Oct. 12 killed eight refugees in a taxi-van just outside Maiduguri.

In February, two female suicide bombers walked into a crowd of refugees at Dikwa camp, 80 kilometers (50 miles) northeast of Maiduguri, killing 58 people and injuring many more.

Boko Haram has stepped up attacks after a months-long lull caused by a leadership struggle.

Nigeria’s home-grown insurgency has killed more than 20,000 people and forced some 2.6 million people from their homes.