ISIS plotting to kill US Congressman - The Horn News 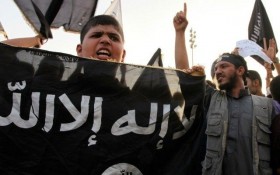 The Islamic State group has announced new targets for assassination, and they include a U.S. Congressman, a top aide of former Secretary of State Hillary Clinton, and international leaders.

The terror group is calling for the death of Rep. Keith Ellison of Minnesota and Clinton aide Huma Abedin — as well as prominent U.K. politicians Sayeeda Warsi and Sajid Javid — for being “politically active apostates” by being moderate Muslims that haven’t joined their cause.

According to the ISIS English-language magazine, Ellison and Abedin are “overt crusaders” that “involve themselves in the politics and enforcing laws of the kufr.”

ISIS intended the threats as a message to other moderate Muslims in the west, and the magazine tells them, “One must either take the journey to [ISIS territory and join] the ranks of the mujahideen therein, or wage jihad by himself with the resources available to him to kill the crusaders and other disbelievers and apostates.”

The magazine also praised the recent terror attacks in Brussels and Paris before warning that, “What is yet to come will be more devastating and more bitter by the permission of Allah, and Allah prevails.”

While the threats could mean more security for Ellison and Abedin, Ellison brushed them off on Twitter: