ISIS launches chemical weapons against US troops - The Horn News 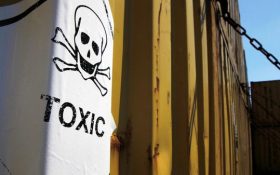 President Barack Obama’s tepid response to ISIS — which he once called a terror JV squad — has been criticized for years.

It should be no surprise, then, that Obama hasn’t even bothered to mention their most aggressive attack on Wednesday.

According to reports, a recent ISIS rocket attack on a military base in northern Iraq where hundreds of U.S. troops are working with Iraqi troops may have contained a mustard agent, a U.S. military official said Wednesday.

ISIS’ use of chemical weapons has been widely reported in the past. But never before have they attempted such an attack on American troops. Thankfully, no one was hurt and U.S. officials are still testing a residue found on a metal fragment from the rocket.

The U.S. official, who discussed details of the incident on condition that he not be identified by name, told reporters at the Pentagon that the attack happened Tuesday at Qayara West air base. The base is a staging area for Iraqi forces preparing for an assault on Mosul, the city that has been the Islamic State’s main stronghold in Iraq since 2014.

The Obama administration has been reluctant to say how many U.S. troops are advising and assisting Iraqi troops at Qayara West. The U.S. official who described Tuesday’s rocket attack said “hundreds” of U.S. troops are there, but he would not be more precise.

The official said a small group of U.S. soldiers who inspected remnants of the rocket after it exploded found a black, oily substance on a fragment of metal. An initial test of the suspicious substance showed it contained residue of mustard agent, but a second test was negative.

The fragment has been sent to a laboratory for further testing, the official said.

Mustard agent in sufficient quantities and concentration can maim or kill by damaging skin, eyes and airways.

Earlier this month, a U.S. general said American warplanes had eliminated a “significant chemical threat” to Iraqi civilians by bombing a complex of buildings near Mosul that Islamic State militants had converted from pharmaceutical manufacturing to chemical weapons production.

Air Force Lt. Gen. Jeffrey Harrigian told reporters on Sept. 13 that the target was an Islamic State headquarters also used to produce lethal chemicals, possibly including chlorine and mustard gas. He provided no details on the chemical production.