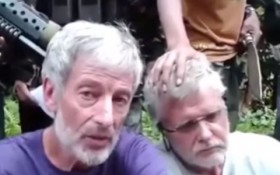 Canada’s Prime Minister Justin Trudeau confirmed that the decapitated head of a Caucasian male recovered Monday night in the southern Philippines belong to one of two Canadians taken hostage by Abu Sayyaf militants in September.

Trudeau identified the victim as John Ridsdel of Calgary, Alberta and said his government will work with the government of the Philippines and international partners to pursue those responsible for this “heinous act.”

Two men on a motorcycle left Ridsdel’s head, placed inside a plastic bag, along a street in Jolo town in Sulu province and then fled, Jolo police chief Supt. Junpikar Sitin said.

Abu Sayyaf militants had threatened to behead one of three men — two Canadians and a Norwegian — they kidnapped last September from a marina on southern Samal Island if a large ransom was not paid by 3 p.m. Monday (0800 GMT).

Jolo Mayor Hussin Amin condemned the beheading, blaming Abu Sayyaf militants, who have been implicated in past kidnappings, beheadings and bombings.

“This is such a barbaric act by these people and one would be tempted to think that they should also meet the same fate,” Amin said by telephone.

Philippine forces were moving to rescue the abductees, also including a Filipino woman who was kidnapped with them, as the Abu Sayyaf’s deadline for the ransom payment lapsed, the military said.

The militants reportedly demanded 300 million pesos ($6.5 million) for each of the foreigners, a reduction from their earlier demands.

The hostages were believed to have been taken to Jolo Island in Sulu, a jungled province where the militants are thought to be holding a number of captives, including 14 Indonesian and four Malaysian crewmen who were abducted at gunpoint from three tugboats starting last month.

“Maximum efforts are being exerted … to effect the rescue,” the military and police said in a joint statement, without divulging details of the rescue operation, which was ordered by President Benigno Aquino III.

About 400 Abu Sayyaf militants were involved in the kidnappings, it said.

In militant videos posted online, Ridsdel and fellow Canadian Robert Hall, Norwegian Kjartan Sekkingstad and Filipino Marites Flor were shown sitting in a clearing with heavily armed militants standing behind them. In some of the videos, a militant positioned a long knife on Ridsdel’s neck. Two black flags hung in the backdrop of lush foliage.

The abductions highlight the long-running security problems hounding the southern Philippines, a region with bountiful resources that also suffers from poverty, lawlessness and decades-long Muslim and communist insurgencies.

The Abu Sayyaf began a series of large-scale abductions after it emerged in the early 1990s as an offshoot of a separatist rebellion by minority Muslims in the predominantly Roman Catholic nation’s south.

It has been weakened by more than a decade of Philippine offensives but has endured largely as a result of large ransom and extortion earnings. The United States and the Philippines have both listed the group as a terrorist organization.