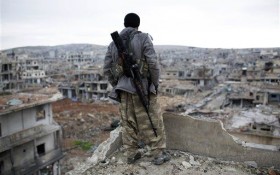 A single shot rings out on the streets of Sirte, Libya.

Panicked ISIS terrorists spray wild gun fire to scare away nearby civilians to try and hide the result – another ISIS chief, Abdullah Hamad Al-Ansari, lays dead on the street.

The bloody assassination was reportedly the third in 10 days in late January, and word of a mysterious sniper has begun circulating throughout Libya.

The lone gunman responsible is slowly gaining a hero status among residents in the area, and locals have started calling the mysterious figure the “Daesh Hunter.”

The three places in Sirte where a sniper has *allegedly* shot men of the Islamic state in the last 10 days pic.twitter.com/LWEUPzXVxF

Now the chiefs commanding ISIS’ spread in Libya are cowering in fear from this sniper on a mission, The Mirror is reporting.

Their state of terror has been turned upside down according to an anonymous source, and ISIS leaders have become afraid to openly roam the streets they once controlled.

The mysterious gunman’s first victim — a Sudanese national named Hamad Abdel Hady — was an official in a local sharia law court and was heading to an ISIS-controlled medical facility before meeting his end, it was reported.

ISIS chief Abu Mohammed Dernawai was next. It was on Jan. 19th just outside Dernawai’s home in the city when the sniper caught up with him.

Finally, Abdullah Hamad al-Ansari, an ISIS commander from the southern part of the country, met his maker after he was tracked and gunned down leaving a local mosque just four days later.

Now, frightened ISIS troops have begun sweeps through the city looking for signs of the sharpshooter, according to locals.

To learn more about this story, check out coverage from The Mirror here.